Buddy, Can You Spare a Barrel?

Global demand in 2004 has been revised up by 330 kb/d to 80.6 mb/d, putting growth against 2003 at nearly 2 mb/d. The increase reflects synchronous global economic expansion. First quarter estimates were revised higher as OECD transport fuel use soared. First quarter demand growth in China is now seen at almost 1 mb/d.

World oil production declined 440 kb/d in April to 81.5 mb/d. OPEC crude supply fell by 415 kb/d. Non-OPEC output growth for 2004 has been revised down despite gains in Russia, due notably to a lower forecast for OECD supply.

Let’s look at some charts first before going further. To the left is a plot of the supply and demand forecast as it has changed over the last 7 months (this is an update from the same chart last month. Because the two values are getting fairly close, it’s a bit hard to see. So I also plotted the data using a Y-axis that begins at 75 mb/d -- a closeup. (Click on images to enlarge.) 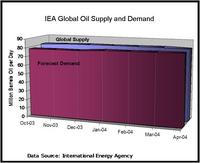 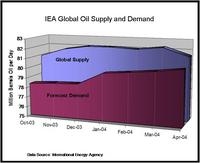 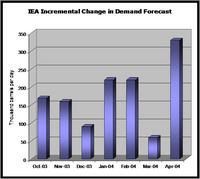 Now to the right is a plot of the monthly change in the demand forecast. These changes are all incremental. According to the IEA, this is the fastest absolute increase in demand growth in 16 years.

The IEA attributes the growth in demand to the growing world economy, and also points a finger at OPEC for the supply issues. OPEC, for its part, countered that its members already were pumping above the official level.

At the same time, the IEA urged increased investment in exploration to find new resources. Hmm. I thought the oil companies were already looking pretty hard for their next barrel. One area of great promise is the increasingly effective deepwater technology.

None of this is inexpensive and without risk. It will be even riskier to focus on the immediate aspects of price and supply without aggressive action on building viable alternatives. That means coordinated policy. An Energy Bill would be nice. It also means consumers understanding the issues and participating as stakeholders in the energy arena.

Haven’t we already had enough grief from “Not Connecting the Dots”?