A Short Field Guide to Hybrids 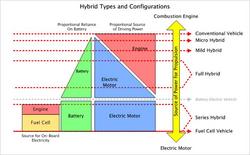 Along with the excitement and growth around any rapidly developing (and selling!) technology such as hybrid vehicles inevitably comes confusion. New terms applied to new technologies tend to be applied differently, and consumers and manufacturers alike need to get on the same page.

Herewith, a short field guide for understanding and classifying the different types of hybrids. (Click on diagram at right to enlarge. Based on material from Technical University of Berlin and Argonne National Laboratory.)

Hybrid vehicles combine two or more power sources that provide propulsion. A conventional car has only a single source of propulsion: either a diesel or gasoline internal combustion engine.  In Hybrid Electric Vehicles (HEVs), at least one power source delivers electrical energy. There are a wide range of possible configurations for an HEV—which is where the confusion comes in. They all are hybrids, but can vary dramatically in terms of the capability of the electric motor, cost, performance and other benefits.

The principle factor in determining the class of HEV is how the electric motor contributes to the propulsion of the vehicle and in what proportion. There are four primary types of hybrids I'll list here:

Most of the action in the market during the next few years will be with mild and full hybrids. It is important to stress that the ultimate capabilities of the vehicle depend on a very large number of factors, not just the configuration of the drivetrain. These factors include:

Hi, i am doing a school assignment, an di was just wondering for a short answer to: two types of propulsion in hev? , so i am not sure if this is where i should be posting the question, but if you do have an answer could you please give me an email bakc at rocky_rock_star@hotmail.com

The EV1 is not a series hybrid, as you state in the article, as it has no combustion engine in it. It is not a hybrid of any kind. It is an example of a BEV, or 100% Battery Electric Vehicle.

Quite right. Error on my part.

the information about HYBRIDS is tremendous & vast.
actually i am a design engg. student and seek a SEMINAR on IDLING SYSTEM used in all HYBRID CARS.if u can help then forward me a short and smart report on these systems.

The automobile market can be intimidating, and if you are just starting out in the wonderful world of wheels you may need advice on buying your first car. There are so many options for car buyers: new or used, red or blue, sports car or SUV, two or four doors… and that is just for starters! Also, as a new car buyer you need to be wary of advice on buying your first car, because there are still quite a few snake- oil salesmen out there in the automotive market looking to sell you a lemon. Following you will...