Japan’s National Institute of Advanced Science and Technology (AIST) and eight private companies have applied for a permit to test mid- and large-size trucks using Dimethyl Ether (DME) fuel, a clean burning synthetic fuel that can substitute for conventional diesel, liquified petroleum gas (LPG) or be reformed into hydrogen for fuel cells.

Slated to start in the end of September, the trial will evaluate the durability and practicability of DME trucks when they run long distances on public roads. The partners in the trial are CO-OP EV, Mitsubishi Gas Chemical, Itochu, Itochu Enex, JFE Holdings, Fukuyama Transporting, Ono Sokki, and Iwatani International. 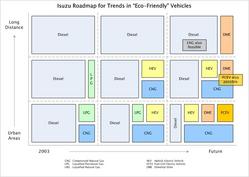 DME has been under research and development in Japan since 1989, when NKK, one of Japan’s leading steel companies, took the initiative. Since then, there have been a variety of production tests, but it was only in Feb 2002 that the first DME trial vehicle was certified for road testing by the government.

Nevertheless, DME has a prominent position in the strategic thinking of many Asian and European auto and engine makers (such as Isuzu and Volvo). To the right is a high-level 2003 roadmap from Isuzu on trends in “eco-friendly” vehicle development. In this outlook, diesel is rapidly supplanted with a mixture of technologies, including DME. (Isuzu is known outside of the US as a key diesel engine manufacturer.)

There are two principal benefits to DME. First is its clean-burning nature; using DME addresses many of the emissions problems associated with petroleum diesel. Second is the ability to synthesize it from a variety of feedstocks: coal, natural gas, biomass. Many of the Asian countries well endowed with coal are looking to DME as an alternative to petroleum or natural gas fuels. Some natural gas powerhouses—such as Iran—are looking to DME as a way to convert natural gas to liquid product prior to transportation.

Whichever benefit you choose, DME appears to be almost ready for commercial debut. Accordingly, the First International DME Conference is being held this October in Paris, organized by the International DME Association.

NKK Technical Review article from 2003 with a detailed description of NKK’s DME strategy and outlook.

Dear sir;
We are glad to know you from network!
With the rapid development of global ecomony, and increase of energy resources consumption, there will cause great pressure to gradual exhaustion of petroleum resources. Energy security also becomes a strategic problem which is greatly concerned for various countries, therefore, as far as the global countries are concerned, it is a challenge to solve the sustainable development in energy resources field in the future. Energy enterprises and qualified institutions should be responsible to deal with energy crisis. At present, Many countries are looking for fuel substitutes actively. In many motor fuels substitutes, methanol fuel is the greatest wishful replacement. Therein methanol is attractive in lower cost, high-octane, simple making-technology, higher mixture calorific value，favorable conveyance and less environmental pollution etc.，which are payed attention by many countries in the world again.
It is started to research on methanol gasoline at home and abroad in 70's last century, the addition of methanol has been achieved approximately 15% without altering engine of autos through the efforts in recent years,.If a higher proportion methanol is added, then the engines must be improved due to the unavailability of techonologies. Since 1997, R&D team under the leader of Wu Yuqi (president of CHINA luohe petrochemical group co.,ltd.) started to research methanol fuel, and overcomed inherent shortcomings of methanol such as lower calorific value, corrosive, toxicity etc through three years efforts and thousand times experiments. Finally, Developed M50(methanol content 50-65%) firstly in world, it can be used directly without altering engine of autos, this epoch-making new achievement causes a enormous sensation in the global scientific and technological circle, have got the high evalutuation of the state leader and news media.

Of course,DME is actually used as propellant of spray can,while it could be a clean and economical alternative fuel if it is produced in a large quantity at low cost.The properties of DME are similar to those of LPG and it can be used for various sectors,household,transportation,power generation,etc,DME can be produced from various resoures as natural gas,coal or coal bed methane through synthesis gas.
, We are very interested in your DME Technology and DME Cars,Can you tell me the DME Car development conditions and DME Technology development conditions in Japan and in the world, Our company is enegery company too,
We are looking farward to corporating with you in Energy field.
In addition, If possible,we will visit you in next month.

CHINA Luohe Petrochemical Group CO.,LTD is established in 1996, it is state-run enterprise group directly of a city with the approval of Luohe structural reforms commission, and then sanctioned by File No.25 of enterprise of Economic and Trade Commission of Luohe [1999], the norm reforms system for the private share-issuing enterprise. After reforming, clearly ownership, flexible mechanism,totallly according to the modern enterprise's operation which world integrates ,have made the fast development. Chosen as "kept the contract,heavy credit" outstanding enterprise by Luohe for many times. And was chosen as ten "private chemical star enterprises of the whole country " in the whole country by the Chinese petroleum and chemical industry association in 2003.The company is a trans-regional and inter-trade large-scale enterprises that mainly handles petrochemical industry, and scientific research, industrial production,commercial trade ,financial investment ,the development of real estate etc.Company's total assets exceed 460 million yuan, there are nearly 1100 staffs now. All kinds of professional and technical personnel and intermediate and advanced scientific and technical personnel are 360, among them,senior engineers are more than 30. The group company has two scientific institutions, has established long-term technological cooperation relation with a dozen institutions of higher learning and R&D institutions,technical force is rich. The company has 23 enterprises under its command.

Hi sir,
Im student and I have a project about DME. I wondr if help me in getting some information about DME.

I am representing an Indian LPG company with interests in bottling /Marketing of LPG and presntly exploring Auto LPG in India.

In this context I am looking for joint venture for branding ,LPG imports and developing Auto LPG network.Also interested for auto lpg conversion eqipments or kits.Presently Auto LPG in India has tremendous potential and right time to venture out.
We are thrilled to note about DME production in China.We would like to explore business in this area also.
I further request you to send me the list of companies presently involved in LPG sector for discussions and presentations.Please let me know interest in this regard and also provide me the concerned contact person details.We are planning to visit china to further explore business.

Looking forward to hear from you soon.