Russia holds the world’s largest natural gas reserves: 47 trillion cubic meters (Tcm)—more than twice the reserves in the next largest country, Iran. (EIA) Unlike Russia’s oil industry, the gas industry is not booming.

Growth of Russia’s natural gas sector has been stunted primarily due to ageing fields, state regulation, Gazprom’s monopolistic control over the industry, and insufficient export pipelines. 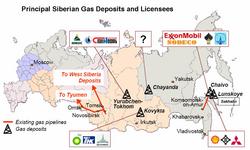 Unlike oil, natural gas is not easy to transport. Producers’ options basically fall into three categories: use a pipeline; liquefy it for bulk shipment (LNG); or convert it into an end product (such as DME fuel) at the gas field, and then transport that using the global transportation infrastructure inplace.

The map of Russia on the right details the largest central Siberian gas reserves (Chayanda (1.24 Tcm), Kovytka (2.0 Tcm) and Yurubcheno-Takhomskaya (1.2 Tcm) as well as the licensees for each. You can see right away that transportation is a problem. And you can also see that Chayanda, the second-largest of the central Siberian gas reserves but the most isolated from major markets, has no licensed producers. (Click to enlarge. Source: Russian Investors and Oxford Analytica)

Russia is now working on a unified gas production, transportation and supply system in Eastern Siberia and the Far East to solve this problem, taking possible gas exports to China and other Asia-Pacific countries into consideration, according to a report from Interfax.

Part of this work apparently has been the consideration of building a Dimethyl Ether (DME) plant in Chayanda to convert the gas to liquid fuel for export.

A technical-economic valuation has also been carried out for a project to build a plant to produce dimethyl ether from natural gas from the Chayanda field, to be subsequently exported by rail. The preliminary results of this study show that these supplies are economically viable.

Combine that with the Iranian work with DME (earlier post) and we have the two countries with the largest natural gas reserves either implementing or actively exploring the production of DME. That, in turn, is going to influence the composition of the vehicle market in Asia and the Middle East at a minimum.

Such a clean-burning synthetic fuel produced from an abundant supply of feedstock is going to be very attractive. Isuzu’s roadmap (earlier post) could prove pretty accurate, with a flourishing of a variety of fuels and powertrains augmenting and then supplanting the diesel/gasoline monopoly.

Adelco, ltd is a car exporter company from Japan.
We are looking for new business partners we have lots of experienced to Russia. Now we would like to develop more. If you are interested please contact us. Thank you.