A BMW prototype—the H2R—has set 9 records for cars powered by hydrogen-fueled internal combustion engines. The H2R set the records during a series of speed trials at the Miramas Proving Grounds in France, prior to heading to Paris for the start of the Paris Motor Show later this week.

BMW Research and Technology (BMW Forschung und Technik GmbH) developed the H2R in only ten months, leveraging much of the work BMW has already put into combustion engines in general, and hydrogen combustion engines in particular. (BMW has been working with hydrogen since 1978, and produced its first prototype in 1979.) 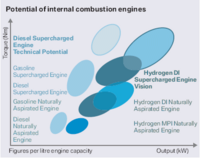 BMW wanted to make more than the point that it was in the lead of developing a hydrogen combustion engine to high-performance production standards. It was also reinforcing its stance that the internal combustion engine, given the sum total of all its features and characteristics, offers the largest number of advantages and benefits all in one as a platform for clean and efficient transportation energy. As represented in the diagram to the right, BMW is targeting hydrogen combustion platforms that deliver equivalent torque but better output (horsepower) than diesel or gasoline engines.

In this view, H2 becomes the next logical power fuel for the combustion platform, as well as the clean fuel. BMW looks to fuel cells to provide auxiliary power (i.e., to function as APUs) in its hydrogen combustion vehicles.

The H2R records, thus, function as proof points along the way. Among the records set were the following:

The H2R powertrain uses the BMW’s six-liter 12-cylinder engine featured in the 760i as its foundation. The main modifications to the engine involve adapting the fuel injection system and management controls to the special features and requirements of hydrogen. (BMW first showed a hydrogen-fueled version of the V-12 in 2003.)

BMW used its production Valvetronic technology as the basis for controlling the different demands of this gas charge cycle. The Valvetronic system controls not only the duration of valve movement, but also the actual valve lift. It works with BMW’s VANOS (variable adjustment of the camshaft) system that provides infinite camshaft adjustment to meet specific engine requirements. Incorporating a hydraulically controlled adjuster unit in the camshaft drive, Vanos in the H2R modifies the beginning and end of the valve opening period for fully variable valve management suited to hydrogen combustion drive.

The H2R won’t be on the market, but the technology will be relatively soon. BMW plans to bring a bivalent (running on both gasoline and liquid hydrogen) vehicle to market as part of its present 7 Series. If one of the tanks is empty, the vehicle automatically switches to the other.

Class site.
Your site has very much liked me.
Different work!!!

Hello my name is Saidvaliev Saidtemirhon, I`m a businessman from Tashkent Uzbekistan & I want to give you a suggestion; Iwant to open H2fuel stations with Autosalons & servises to reequipment fuel sistems of cars as "BMW H2fuel sistem" or another likely sistem in Tashkent And I ask you to be my portner in This project