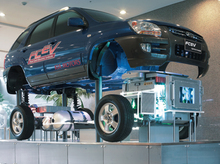 Kia is introducing a fuel cell prototype of its new Sportage SUV at the Paris Motor Show this week. The Sportage is similar in most aspects to the second-generation Tucson FCEV unveiled by Hyundai earlier this year at the Geneva Motor Show.

Kia is a subsidiary of Hyundai, and although it operates separately in the marketplace, it shares, among other things, R&D facilities.

The specifications, components and even the corporate comments about the Tucson and the Sportage FCEVs map almost directly, down to the observation that each company developed both the fuel cell vehicle and the new generation conventional versions (Tucson and Sportage) in parallel engineering programs.

The Sportage FCEV (code-named FKM), uses fuel cells from UTC Fuel Cells of Hartford, and a drive train unit from Enova Systems. (The code name for the Hyundai Tucson FCEV was FJM.) Enova (earlier post) is a strategic partner of Hyundai, and has been working with the automaker for years on the development of all electric, hybrid electric and fuel cell drive systems.

The Sportage FCEV uses lightweight aluminium body shell components, rather than the all-steel construction of the conventional Sportage, allowing the FCEV to maintain a power-to-weight ratio that is similar to the new production model SUV.

Hyundai and Kia are making a strong push across all segments of the automarket, including advanced alternative platforms.

“Now we will be able to build fuel cell electric vehicles in higher volumes for fleet testing and the latest Sportage FCEV drives us closer to the commercialization of fuel cell vehicles,” commented Kim Sang-Kwon, President of Research and Development for the Hyundai-Kia Automotive Group.

“Migrating our fuel cell technologies into a smaller, more compact vehicle presented many design challenges...With the new Sportage FCEV, Kia takes a big step towards our goal of developing a commercially viable zero-emissions vehicle based on fuel cell technology by 2010.”

Kia has so far been a bit of a lower-end sibling to Hyundai, racked with worse quality problems. The combined Hyundai/Kia management is working hard and fast to rectify that (as well as Hyundai issues.)

BusinessWeek ran a profile of Hyundai’s ambitions in its 6 Sept 04 issue. (Available online without being a BW subscriber, although you must register for the site.) Not much of a focus on the company’s strategy for sustainability, but some interesting insights into corporate culture, and some specific quality initiatives.

In a way, the mirroring of advanced vehicle development between these two can serve as a sort of research multiplier. One of the ways automakers seek to refine these emerging systems is by getting numbers of them out in trials. Hyundai has already committed some 32 Tucson FCEVs to such field work. If Kia can mirror that, the combined company has a larger—hence more valuable—base of data and experience from which to work.