With Stop & Start, the engine automatically turns off and enters standby mode when the vehicle halts at traffic lights and traffic jams. The engine re-starts within 400 milliseconds when the brake pedal is released, with the vehicle pulling away once the accelerator is pressed. The Stop & Start system reduces fuel consumption by 10% for city driving, 6% in a standard combined cycle and up to 15% in heavy traffic. CO2 emissions drop by a similar proportion—if the engine is not running, it’s not consuming or emitting. Pretty straightforward.

The Citroën C3 1.4i 16V Stop & Start, which will be rolled out in early November, will be the first mass-produced car equipped with this system. Peugeot will gradually extend the system to other Citroën and Peugeot vehicles.

Stop & Start activates when the vehicle exceeds 6 mph for the first time and the battery is sufficiently charged. A driver can shut the system off manually. The system automatically deactivates under certain conditions for safety and comfort—if the defroster is on, for example, or if the outside temperature is too hot, requiring continuous air conditioning. 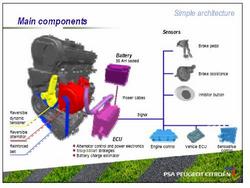 The engine restart is silent and, according to Peugeot, transparent to the driver. Restarting the engine consumes fuel equivalent to two to three seconds of idling. Thus, if the car is stopped for more than three seconds, the Stop & Start system begins saving fuel.