Ebus is providing four propane-fueled series hybrid trolley buses for Knoxville, TN, and another two to Gatlinburg on a six-month trial.

With the series hybrid-electric system, the bus is propelled only by an electric motor, which in turn receives its electricity from a NiCd battery pack. TheNiCd batteries provide 60 – 90 miles of range between charges while offering up to 2000 charge/discharge cycles (approximately seven years of typical revenue service).

The batteries can be recharged by the on-board propane-fueled 30 kW Capstone MicroTurbine generator, or via a plug-in option. With the turbine generator as a range extender, the buses have a range of approximately 250 miles. The picture to the right shows the power compartment of the Ebus —the turbine is on the left. (Click to enlarge.)

Currently, Ebus only manufactures 22-foot buses, shuttles and tolleys, although it will be releasing a 30-foot model in the future. It offers propane, diesel or natural gas versions of the turbine APU.

Capstone, known primarily for its turbines for distributed power generation and Combined Heating and Power (CHP) applications, has been carving out a growing niche in transportation. In addition to its partnership with eBus:

The emissions profile of these vehicles is extremely low. To the right is a comparison of the Capstone emissions vs. other bus engines (from the AVS site). (Click to enlarge.)

Here’s a quick description of how the turbine works. (Cutaway diagram below right. Click to enlarge. For an interactive version, see this.) 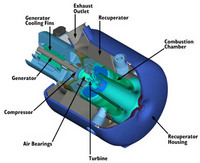 Air is compressed and injected into the recuperator where its temperature is elevated by the exhaust gases expelled from the turbine. This process increases the system efficiency. The heated compressed air is mixed with fuel and burned in the combustion chamber. The combusted hot gases expand through the turbine, providing the rotational power. Patented techniques in the combustion process result in the extremely low emission exhaust stream.

i want more info for set up and service hybird buses in malaysia. expactlly for buses made from japan example hino and nissan disel