There are many different technology options and possible combinations available and emerging for sustainable transportation, short and long term. The complexity and number of variables makes it difficult for stakeholders to sit down and to evaluate definitively the environmental and energy impact of these systems. For automakers faced with different types of regulations, policy makers trying to craft those regulations and consumers trying to do the right thing, the problem can become very confusing.

Advances in internal combustion engines and combustion control (both gasoline and diesel, with a gradual transition to some form of HCCI) and hybrids play a fundamental role. Ongoing improvements in transmissions and improvements in the vehicles themselves (shape, weight, electronic systems, APUs) are also key factors. Waste Heat Recovery (recapturing some of the otherwise wasted heat energy of the combustion) will also prove an important avenue.

Fuels also are fundamental. In addition to the enhancements to “standard” petroleum fuels, such as the use of additives, the advent of ultra-low sulfur diesel, and increasing blending with biofuels, there is the potential for large-scale biofuel use and the incorporation of other, clean-burning synthetic or alternative fuels.

Finally, there is the transition to a non-combustion engine regime, such as hydrogen fuel cell vehicles.

How does one decide what is “best” from an energy and emissions point of view?

To work through this, researchers build models making basic assumptions about the development and combination of technologies, and then calculate the environmental and energy impacts of these different automotive systems during three identifiable stages:

Like any similar effort, the results are only as good as the model, and the detail that goes into the model. Nevertheless, even simpler models can have directional results. 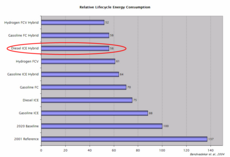 John Heywood and his colleagues at MIT’s Sloan Automotive Laboratory have done quite a bit of research on this during the last five years. He presented an overview of their findings at the recent Diesel Engine Emissions Reduction Conference (DEER 04).

The chart to the right depicts the energy consumption of a set of different vehicle technologies relative to a baseline the MIT team defined as evolutionary improvements in fuel and vehicles up to 2020—improvements similar in their relative amount to those achieved over the last 25 years. Compared to that baseline, a gasoline vehicle in 2001 consumed 1.37 times the energy in its lifecycle.

You’ll note that a diesel hybrid design has lower impact in the energy lifecycle than a hydrogen fuel cell vehicle. Only combining fuel cells with batteries to create a fuel cell hybrid (rather than a gasoline or diesel hybrid) produces a lower impact. This is due to the energy cost of the production of hydrogen, depicted in the chart below.

None of the scenarios above factor in alternative or synthetic fuels. Running biodiesel in lieu of the petroleum diesel projected in the studies would certainly have an impact, although the calculations of the overall energy lifecycle become complicated by the calculations of the energy cost of agriculture. By some calculations (more on this below) biodiesel provides a worse emissions scenario despite being a cleaner-burning fuel because of the energy and emissions cost of agriculture. The ethanol industry has faced a similar situation as proponents and detractors argue back and forth over the “field-to-wheel” benefits.

Another, more granular view of the impact of different technology choices comes from the more detailed scenario work being done as part of the analysis of AB 1493— the California Climate Change bill that will mandate reduction of CO2 as a pollutant. The combinations are too numerous to reproduce here, but the gist of the research findings is that technology combinations—either on-the-shelf or soon-to-emerge—could cost-effectively reduce greenhouse gas emissions by the amounts targeted in the bill. Some alternative fuels were included as part of the study; biodiesel was not.

The chart to the right is a summary taken from the final staff report (long and detailed) on technologies and the rationale behind the bill. Click to enlarge. (The consideration hearing is tomorrow, 23 Sep.)

If you can pick through the chart without going cross-eyed, you can see some major potential wins in addition to the more minor, but additive, techniques. Hybrid technologies are one. Advanced combustion techniques and intelligent combustion control are another.

One of the most comprehensive models for emissions on the fuel side comes from Mark Delucchi at UC Davis. Not only does his model factor in more types of GHGs (Greenhouse Gases) than most other studies, he also incorporates alternative and synthetic fuels. His model finds that biodiesel and corn ethanol are among the worst in terms of aggregate increases in GHG emissions, along with synthetics (Fischer Tropsch) produced from coal. (Table 58 in his report has a summary of the emission findings.)

His overall conclusion: conventional life cycle models of energy use and emissions may reasonably well represent differences between similar alternatives, but need further development to represent adequately differences between modes of transportation or between dissimilar fuel production pathways (such as biofuels vs. fossil fuels).

That’s an excellent point. Tank to wheels seems a more tractable analysis problem than well (or field) to tank. But rather than wait for a grand answer (42?), stakeholders can take definitive steps now to reduce fuel consumption, reduce emissions, and lay the foundation for sustainability. The scientists and engineers are doing their parts. The two stakeholders that can make the most difference now in the shorter term are the policy-makers and the consumers.

Lifecycle energy is one thing; lifecycle CO2 and air pollutant production is another. By the way, have you soon Amory Lovin's latest, The Oil Endgame yet?

How can one figure the costs of green transport, without figuring the costs of a green fuel? Bioethanol and biodiesel are easily made from crops that do not have high agricultural energy costs, and can be made from combination food/fuel crops that deliver 2 or more end products, increasing efficiency, and submarining the argument that agricultural based fuels take food off the table.

John, thanks for the pointer to The Oil Endgame. I saw that it came out, but hadn’t read it yet. Exec summary looks good.

Steve, I don’t think there is any argument over the need to calculate the costs. It’s how that calculation is done that causes all the disagreement—and that’s going to tie into the feedstocks and agricultural methods used. I was startled to see how badly soy biodiesel fared in the DeLucchi study above—but that’s also looking at large-scale industrial agriculture. (And it also doesn’t factor in different, newer methods, etc.) You’re taking a different, distributed and decentralized approach with Green Trust Sustainability, and, ahem, more power to you.

I did not see any references to Battery Electric Vehicles (BEVs) or Plug-in Hybrid Electric Vehicles (PHEVs). With existing Li batteries giving 200 miles per charge and electronics pushing charge density, discharge and recharge rates, I was wondering why these technologies seem to be ignored in this article.

Well, that’s a fair question. Part of the answer is the structure of the MIT and CARB studies that are the basis for this didn’t put a great deal of focus on alternative fuels and BEVs or PHEVs. That in itself is probably worthy of separate discussion.

Delucchi, however, did; and I should have and will reproduce his detailed summary table that includes all the options. However, his study only deals with CO2 emissions—not energy use.

As an aside—the reduction in CO2 emissions from BEVs varies widely depending upon the source of the plug-in power (as you might expect).

Anyway, thank you for pointing out the omission, and I’ll get the Delucchi summary chart up as part of the ongoing dialog.

I have just come from a Lung Association spare the air / health day. I had my Toyota Rav4ev on display along with pictures of my solar electric system, with a current electric bill with a -$92.41 credit. I got to talk alot about hybrids, electric and fuel cell cars.

"... As an aside—the reduction in CO2 emissions from BEVs varies widely depending upon the source of the plug-in power (as you might expect).
..." this also applies to hydrogen production and fuel cell vehicles.

When talking about the comparsions of energy usage and pollutants. BEV are often assigned the electrons that come from coal fired power plants and fuel cells the hydrogen comes from renewable energy.

Doing a one-to-one comparsion between FC & BEV cars I think you will see BEV's have a lower foot print than the best FC since hydrogen has to be manufactured.

So what are you driving?

I think at least for the short term, the best way to go is with diesel-combustion engines.

Besides having 35-45 percent better fuel efficiency for the same energy output as gasoline engines, diesel engines can be fuelled by biodiesel fuels made from various forms of biomass. (After all, Rudolf Diesel's first prototype ran off peanut oil, of all things!) Unlike petroleum-based diesel fuels, biomass-derived diesel fuels don't have diesel exhaust particulate problems, and it's not that hard to distill the biodiesel fuel so it doesn't have the "French Fry smell" of many home-distilled biodiesel fuels. There are now studies to make gigantic shallow ponds to grow a certain type of algae that could make enough biomass to refine many, many millions of gallons of biodiesel fuel! :-) Also, since biodiesel fuel can be handled just like regular petroleum-based motor fuels, it also means the current distribution and fuelling infrastructure can be kept in place, saving many, many billions in distribution costs.

Pyrolitic conversion of biomass directly into charcoal, gasoline, diesel, and natural gas all usuable by existing machinery can be performed by existing refineries.

Of course, the only crop capable of sustainably providing the necessary biomass is conveniently illegal in the US: hemp.

I don't see any reference to biodiesel in table 58 of the UC Davis study. What am I missing???

Question;
Why is no one trying to trap the exhaust heat of a running diesel or gasoline engine. There is up to 2000 deg F. available there. Simply surrounding the exhaust manifold with a tank of biomass would give us a good start on pyrolysis. You could either make straight crude oil off that or take the gasses off at lower pressure to run a fuel cell and still produec usable charcoal or coke, depending on the feedstock.
Ralph Zumbro

While biodiesel has some excellent things going for it, after using it for 70,000 miles on one car, and 10k miles on another... as well as distributing 3000 gallons of it to a small 'coop', I can say I have formed an opinion.

The TDI with a heated filter is working well. The older VW Turbodiesels are poorly engineered, and do not last.. and have lots of blowby. If they run diesel, they are definitely an environmental disaster.

When one puts an old rabbit on the road again, diesel is put in it occasionally.

Biodiesel gels. We have all kinds of problems with it in the winter, and I live in a temperate coastal climate.

Bio is backed by some very excited people. There is a dark underbelly to it all, now with Archer Daniel Midland running the show with imported soy and palm kernel oil imported from slash burned rainforests of malaysia. From home producer, to coop, to regional, to megacorp. Glad I could be part of it.

I will be looking at an SULEV for our next vehicle. I would have to say the bio is not very user friendly, and while great for industry, we can do better emission wise with our cars. Check the hoopla. Ask yourself how much biofuels can be grown to support our habits. Ask why the city of Berkeley, Teluride and others have quit using it now, after being huge advocates.