Assuming the testing with La Poste—and presumably some others—goes well, SVE intends to commercialize the vehicle in the second half of 2006. A full electric version of the Cleanova II, also equipped with a TM4 drivetrain, will be commercialized concurrently. The target is fleet buyers in Europe and North America. Groups in China and India are also reportedly interested.

The Cleanova II—based on the Renault Kangoo—is the second-generation of electric vehicle from SVE, and made its debut at the Geneva Motor Show earlier this year. 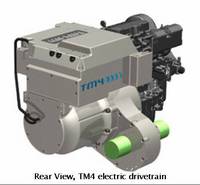 An electric drivetrain from TM4, a subsidiary Hydro-Québec, the giant Canadian energy company, powers the Cleanova II. The drivetrain is a multifunction system that integrates a 35 kW electrical motor, a 15 kW range extender generator and a differential in a single module. The drivetrain module also includes all the associated control and power electronics, the DC-DC converters, and the battery charger. (See image at left.)

The vehicle uses a new Lithium-Metal-Polymer battery from Avestor (also a Hydro-Québec subsidiary) for storage.

Avestor claims that the LMP batteries offer advantages such as a much higher energy capacity per unit volume and unit weight, and a very predictable and stable charge/discharge characteristics over varying environmental conditions—all very good qualities for an electric vehicle battery. A chart from Avestor comparing the energy capabilities of different technologies is below.