The Independent reports that the rate at which CO2 is accumulating in the atmosphere is accelerating.

Atmospheric levels of carbon dioxide (CO2), the principal greenhouse gas, have made a sudden jump that cannot be explained by any corresponding jump in terrestrial emissions of CO2 from power stations and motor vehicles—because there has been none.

Some scientists think instead that the abrupt speed-up may be evidence of the long-feared climate change “feedback” mechanism, by which global warming causes alterations to the earth’s natural systems and then, in turn, causes the warming to increase even more rapidly than before.

The feedback phenomenon has already been predicted in the supercomputer models of the global climate on which the current forecasts of warming are based. A key aspect is the weakening, caused by the warming itself, of the earth’s ability to remove huge amounts of CO2 from the atmosphere by absorbing it annually in its forests and oceans, in the so-called carbon cycle.

Hitherto, however, that weakening has been put decades into the future. 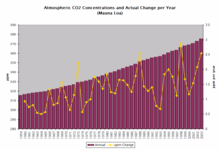 The possibility that it may be occurring now is suggested in the long run of atmospheric CO2 measurements that have been made since 1958 at the observatory on the top of Mauna Loa...

But the worry now is not merely the swelling volume of CO2 but the sudden leap in its increase rate. Across all 46 years of Dr Keeling's measurements, the average annual CO2 rise has been 1.3ppm, although in recent decades it has gone up to about 1.6ppm.

There have been several peaks, all associated with El Niño, the disruption of the atmosphere-ocean system in the tropical Pacific Ocean that causes changes to global weather patterns. In 1988, for example, the annual increase was 2.45ppm; in 1998, 2.74ppm; both were El Niño years.

Throughout the series those peaks have been followed by troughs, and there has been no annual increase in CO2 above 2ppm that has been sustained for more than a year. Until now.

The chart above plots the annual data from the Mauna Loa observatory, along with the actual annual ppm change in concentration. Click to enlarge.

Dear Sir
While every country is finding ways to curb car emissions,find new systems of taxation, and penalise all those who do not abide by the systems, here in Malta we just go bla bla and do nothing just talk. This way people keep on using their car years on end. If the EU wants to adopt a system of cleaner air it will have to enforce the systems which are being suggested. Unless there are systems to see these changes enacted I am afraid it is pointless just to have the comissions views on paper only. First registration taxes will have to be eradicated and replaced by new systems as the EU suggests and those who pollute the most will pay the most. See that this is carried out in Malta as otherwise it remains an easy tax and nothing will be done about it. Thank you. R. Bonello.