Researchers at the DOE’s Idaho National Engineering and Environmental Laboratory (INEEL) and Ceramatec, Inc have successfully shown that they can produce hydrogen at temperatures and pressures suitable for a future Generation IV nuclear reactor via High-Temperature Electrolysis (HTE). This marks a milestone along the research path laid out some three years ago on exploring different mechanisms for hydrogen production via nuclear energy.

The simple and modular approach we’ve taken with our research partners produces either hydrogen or electricity, and most notable of all—achieves the highest-known production rate of hydrogen by high-temperature electrolysis.

The experimental system (not nuclear-based) produced hydrogen at a rate of 50 normal liters (standard temperature and pressure) per hour. 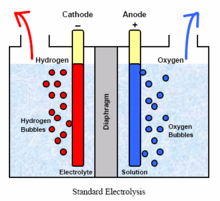 The technology of hydrogen production through conventional water electrolysis is well-established. Conventional electrolysis splits water into its components—hydrogen and oxygen—by charging water with an electrical current. The charge breaks the chemical bond between the hydrogen and oxygen and splits apart the atomic components. The resulting ions form at two poles: the anode, which is positively charged, and the cathode, which is negatively charged. Hydrogen ions gather at the cathode and react with it to form hydrogen gas, which is then collected. Oxygen goes through a similar process at the anode.

The main drawbacks of conventional electrolysis for large-scale hydrogen production are the amount of electricity required for the process and the high cost of membrane production. 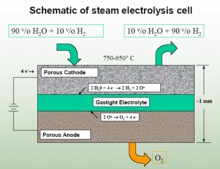 High-temperature electrolysis (HTE) adds in some of the energy needed to split the water as heat instead of electricity, thus reducing the overall energy required. HTE uses a device very similar to an Solid Oxide Fuel Cell (SOFC) (Cermatec’s expertise).

Because using heat directly is more much efficient that first converting heat to electricity, the overall efficiency of the high-temperature system is much higher. That assumes, of course, that you have a readily-available, non fossil-fuel-based source of high heat available—i.e., that you have an advanced high-temperature nuclear reactor or an adapted solar energy system at hand.

Current nuclear thinking on HTE presumes a helium-cooled, high-temperature Next Generation Nuclear Plant as an element of the entire system. The helium, heated by the nuclear reaction to a temperature of approximately 1,000ºC, spins a turbine to generate electricity and also heats water to superheated steam for the HTE process. (Diagram of the concept below.)

From a planner’s point of view, the ability of the nuclear plant to generate electricity and hydrogen makes the solution an attractive one. There are other high-temperature reactors under consideration as part of the Generation IV nuclear research plan, as there are other research paths (thermochemical production) for hydrogen generation under the Nuclear Hydrogen Initiative.

According to INEEL, a single next-generation nuclear plant will be able to produce in hydrogen the equivalent of 200,000 gallons of gasoline each day.

There are numerous issues specific to HTE to work through, including reducing the cost of manufacturing electrolytic cells and components and increasing the lifetime of units. This would be a fairly hostile environment to many materials.

If you take the nuclear-specific element out of it for a moment, however, what the INEEL-led team is discovering and developing is not inextricably bound to nuclear energy; all HTE requires is a high heat energy source.

Accordingly, another DOE initiative is exploring the solar-hydrogen potential, and is coordinating with the experimental work at INEEL. INEEL has, I think, a bigger budget.

Solution: This wasted energy could be turned into electric energy with the use of thermocouples placed in the exhaust manifold and/or the catalytic converter. Several thermocouples wired in series would provide free electricity for a high temperature electrolysis (HTE) system. Free heat to operate the (HTE) system would also be supplied by the vehicle's exhaust system. Hydrogen from the (HTE) system would be fed into the intake manifold of the vehicle's engine, which would provide more power to the engine, and improve the vehicle's fuel economy.

Discussion: With this method no mechanical energy is robbed from the vehicle's engine. Only heat energy, which is normally wasted, would be used to operate the (HTE) system. We can no longer continue to waste energy the way we have in the past. All waste energy should be used wisely. I have entered this idea in the since silced bread contest at: sinceslicedbread.com

i wuld like to knw abt the statistical result over this system.
can anyone help me out?