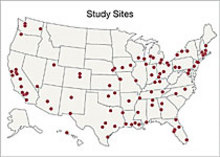 Although ground-level ozone has long been associated with various adverse health effects, studies up to now have been inconclusive in establishing a link between daily ozone levels and mortality rates.

The authors of this study, however, established  a statistically significant association between short-term changes in ozone and mortality on average for 95 large US urban communities, which include about 40% of the total US population.

They found an increase of 10 ppb (parts per billion) in the previous week’s ozone was associated with a 0.52% increase in the overall daily death rate and a 0.64% increase in cardiovascular and respiratory-related deaths. This would translate to 319 extra deaths in New York City and nearly 4,000 extra deaths across the 95 areas studied in the year 2000 alone, the researchers calculate.

Ground-level ozone is a secondary pollutant that is the product of the photochemical reaction of air (oxygen), the contents of engine emissions and evaporative vapors (nitrogen oxides, hydrocarbons, assorted volatile organic compounds) and sunlight.

Despite improvements in reducing  “bad air”  days, there is still a long way to go to meet clean air targets, especially in areas such as Los Angeles. (NYT.) This study highlights that even a few days of non-compliance will be fatal for some.