Samsung Engineering has successfully tested a prototype fuel-cell scooter that uses a version of  “hydrogen on demand” technology to generate its own hydrogen from a solution of sodium borohydride. The scooter, the result of a project sponsored by the Ministry of Science and Technology and the Korea Institute of Science and Technology, can run up to 140 kilometers on 6 liters of hydrogen fuel.

There are a few interesting aspects to this. First, up to now the most visible work on hydrogen-powered and hybrid scooters and motorcycles was coming from Honda and Yamaha (Japan). Both have shown prototypes of very interesting fuel cell (and hybrid, in the case of Honda) scooters. Samsung (Korea) is trying to get a place at the head table.  (As is Hyundai (Korea) with automotive hybrids and fuel cell vehicles).

“The development and testing of the hydrogen-powered scooter shows that South Korea’s technology is on a par with that of the world,”said Yu Yong-ho, president of Samsung Engineering’s R&D center.

Second is the use of sodium borohydride as an on-board feedstock for on-demand conversion to hydrogen. 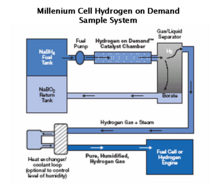 Millenium Cell is the leader in developing sodium borohydride-based energy sources. Using a proprietary catalyst, their patented and trademarked  “Hydrogen on Demand” systems can support a range of applications from personal electronics to transportation. A diagram of a Millenium Cell Hydrogen on Demand system is to the right.

Sodium borohydride (short for sodium tetrahydridoborate: NaBH4) is a compound with very high hydrogen content. When NaBH4 is suspended in an aqueous solution and then passed over a catalyst, the reaction produces a large amount of hydrogen, along with a benign byproduct—sodium metaborate—that can be recycled back into sodium borohydride.

There are a number of advantages to this approach for creating hydrogen:

The primary disadvantage is the cost and availability of the compound.

DaimlerChrysler used Millenium Cell technology it its Natrium fuel cell concept car, introduced in 2001. The Natrium (Latin for sodium, and the origin of the “Na” symbol for the element) is based on a Town and Country minivan, and uses a Millenium Cell fuel processor with a Ballard fuel cell, Siemens motor and SAFT Li-ion battery pack.

In 2003, Samsung and Millenium cell entered into a partnership to jointly develop fuel cells for portable devices. The scooter apparently is related, in concept if not through licensing. Portable devices is indeed Millenium Cell’s principle area of focus for commercializing their technology. Transportation, for them, is an area of future interest.

The Samsung-Millennium Cell relationship has been terminated. Millennium's CEO said so during the company's 7/28/04 conference call: "We have previously described our efforts to enlarge the scope of our work with Samsung. While we have made good progress toward the technical specifications in the 2nd phase of this partnership, we have been unable to finalize commercial terms on a cost sharing basis that would be satisfactory to us. Therefore, we will not be proceeding with Samsung at this time. This is not a reflection of our technology or its potential, but of management changes within the Samsung organization, and a change in their funding priorities. While this is disappointing, we will continue our dialog with Samsung as a potential end user of our technology."

Millennium Cell almost certainly has nothing to do with the Samsung scooter.

While NaBH4 can provide high density hydrogen storage, it is very expensive, $30-$40 per gallon gasoline equivalent. Any transportation fuel system based on NaBH4 would require all new infrastructure to return used reactant to a central processing plant for re-use.

In my opinion the prosepect of NaBH4 becoming a significant replacement for gasoline or other current transportation fuels is remote in the extreme.

Thanks for the correction!

To whom it may concern,

What motor cars you produce.

The cost of boron (hydrogen carrier) is a one time expense. The on-going expense involves recharging the compound with hydrogen (and, of course the cost of the hydrogen).

The Valeswood H-Bike hydrogen fuel cell bicycle may hit paths and roadways sooner than anyone thinks. The Valeswood H-Bike was rolled out this week at the NEMEX Sustainabilitylive renewable energy show in Birmingham, UK.
This hydrogen fuel cell bicycle beats an electrically assisted bike hands down in that a bike powered by battery can only travel [...]
mobile phones for sale--mobile phones for sale
---
FriendyAnil