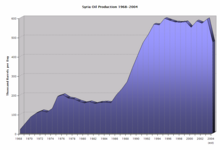 Syrian oil production peaked in 1996 at 586,000 barrels per day, and then began a slow decline. That decline has apparently suddenly accelerated.

Albawaba.com cites a Syrian Arab News Agency (SANA) report indicating that the country’s production of crude oil has dropped to below 500,000 barrels of oil a day for the first time in over a decade.

Until now, estimates had put Syria’s crude oil output at an average daily level of about 500,000 bpd. The report cited by SANA, however, indicates that Syria is currently producing only about 475,000 bpd. Of that, the country exports 300,000 bpd, representing 60% of the government’s hard currencies revenue.

The US EIA has a rather bleak view of Syria’s prospects.

Syrian oil production is expected to continue its decline over the next several years, while consumption rises, leading to a reduction in Syrian net oil exports. If this trend continues, it is feared that Syria could become a net oil importer within a decade.

Becoming a net importer, of course, means placing yet another call on the global oil supply. It also dramatically changes the economics of the country. When a country is that dependent on a single source of export revenue, and then has to switch over the course of a few years to becoming an importer, it not only loses its major source of revenue, it has to pay out on top of it.

This accelerated drop may indicate the crossover will arrive sooner than expected—and with it the social upheaval that will follow in its wake, absent any diversification of the country’s sources of revenue.