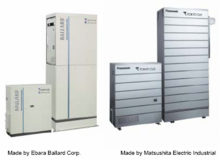 Tokyo Gas Co. is introducing a home hydrogen fuel cell-based co-generation system to provide electricity, heat and hot water—but not, as does the Honda Home Energy System II (earlier post) hydrogen gas for vehicles. Not yet, at least.

The systems, jointly developed with Ebara Ballard Corporation and Matsushita Electric will be on the market on a limited scale on February 8, 2005. Tokyo Gas plans to roll the system out more widely in 2008.

The company will install 200 units in certain areas where maintenance capabilities have been established within Tokyo Gas supply area by the end of 2005. The company is offering a FC Partnership agreement for early subscribers: a ten-year contract at ¥1 million—approximately $9,726, or $81 per month. FC Partners will provide Tokyo Gas with operational data and feedback for the first three years. Tokyo Gas has established a standard hydrogen co-generation tariff with a maximum monthly charge of ¥9,500 (approximately $92).

The 1 kW systems have a hot water tank capacity of 200 liters.

The feedstock for the system is Tokyo Gas’s city gas—predominantly natural gas from LNG with the addition of some propane from LPG to adjust the calorific value.

Respected sir,
Hai,i had one project to do to my college about hydrogen future.i want to submit within two weeks.how we prepare and supply the hydrogen?so pls tell about this full details and tell clearly ok.pls sir help for me.i cant forgot u for my life long.
THANKING YOU.
Your's sincerely,
D.Issac

I am glad to you thank you very much your are making green world
i think if researches are going like alternative fuels.
in indian mythology. they have aeroplanes (puspaka vimanam) how it is possible to run without fuel. is it possible to generate power from crystals or any other metals. it is mistry to me or world