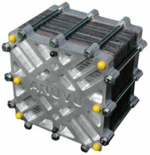 ZAP, an electric vehicle distributor, says it intends to create fuel cell-powered vehicles for delivery to consumers in 2005 by working with PEM fuel cell manufacturer Anuvu.

The company’s first commercially available fuel cell hybrid (for fleets) is based on a Nissan Frontier pickup.

The current Frontier-based CUV uses two 6kW fuel cell stacks in parallel for a combined 12 kW output. The CUV pairs this with lead acid gel batteries and Anuvu’s own hybrid power management system for a peak 100 kW to drive a Solectria AC 90-C motor. The motor delivers 400 Nm of peak torque, 90 Nm of continuous torque and 40 kW of continuous power.

Zap wants to package and market this capability as part of its portfolio, and has signed a purchase order for an undisclosed number of Anuvu Power-X fuel cells.

ZAP’s goal is to dominate the niche for advanced transportation. Our philosophy is to partner with all of the market players that promise near-term solutions.

ZAP is a persistent and creative promoter. It started selling its personal electric vehicles on the Internet in 1995. Earlier this year, it signed a distribution agreement with Costco for the ZAPPY scooter, auctioned its Americanized SMART cars on eBay, and has recently inked $2.98 million worth of wholesale purchase orders for the SMART car from US dealers.

Once ZAP received a Letter of Conformity for those SMART cars from the EPA this year, it was able to begin organizing U.S. marketing and distribution for the car. ZAP has a near-term goal of 150 dealer outlets by second quarter of fiscal year 2005.

Those initial outlets are to be the foundation for ZAP’s plans to build a dealer network catering to “socially responsible car buyers” with advanced automotive technologies, including fuel-efficient automobiles powered by gasoline, electric, hydrogen and other fuels. Any product resulting from the partnership with Anuvu would thus end up in those dealerships.

The barriers and obstacles to a hydrogen fuel cell vehicle on the dealer lot in 2005 are many and obvious—especially price, vehicle performance and fueling infrastructure. All those constraints help form the strategy of mainstream fuel cell vehicle makers of shooting first for combinations of multi-year trials and fleet leasing.

There’s something to be said, though, for just going for it. If ZAP and Anuvu can package a reasonably-priced  vehicle and offer a solution to the fueling issue (perhaps by providing on-site generation at the ZAP dealerships) they probably can build a small, niche market in the near term. Whether that can be a profitable and sustainable market at this stage is another question.

Another issue for ZAP could be its capitalization. The company (publicly traded, ZAPZ.OB) lost $10 million on $4.87 million of revenue (trailing twelve months as of 30.Sep.04), and has only $2 million in cash on the balance sheet. Financing an aggressive expansion into dealerships and rolling out new lines of advanced technology vehicles will require large amounts of creativity, sales ability,  financial gymnastics, and tolerance for risk. Of course, depending how ZAP prices its dealer franchises, those 150 outlets may be part of the financing solution as well as the distribution and sales solution. It will be interesting to see how ZAP tackles this.

please, please....when will the smart car become available in the us???????

I know you from you website . so i want to know whether there is room for our cooperation .
we are a battery producer ,One of the largest manufacturer of sealed lead-acid battery in China. We produce 2V-36V series batteries with over 200types,rated volume:from 0.3 AH TO 3000 AH . Currently the annual production capacity has reached 600,000 KVAH.

The House The house itself is a funky 1981 contemporary, built the same year that Diana Ross and Lionel Richie ruled the charts with Endless Love. Feel free to sing that in your head while touring the colorful 3,000 sq. ft. with circular staircase running off of a great greatroom. It's got 6 bedrooms, 5. 5 baths, a landscaped wrap- around terrace, and while the basement and top floor need an overhaul, the main living area has some impressive finishes, especially in the kitchen and master bed and bath. There...