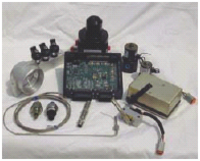 Initial testing of Hybrid Fuel Systems’ conversion kits to retrofit medium and heavy-duty diesels for dual-fuel operation with natural gas showed reductions in PM emissions of 78.9% and NOx emissions of 15%, according to results from an independent laboratory. Use of the Fuel 2 kit enabled a 71.2% displacement of diesel with natural gas.

The results are in a report provided to Hybrid as part of a process under which the company is trying to be approved by the EPA and CARB as an emission control device.

Hybrid’s Fuel 2 kit allows the diesel engine to run on either compressed or liquefied natural gas. The Fuel 2 kit retails for $4,500. Fuel storage tanks, catalyst and linkage will bump the total cost per conversion up to around $10,000.

Hybrid Fuels has an interesting business story behind it, detailed in a profile in the Tampa Tribune.

Hybrid Fuel Systems Inc. had $6 in the bank in late 2003 when the company was taken over by a firm that tries to salvage struggling businesses.

There was much that needed attention at the company, which makes parts and software to convert diesel engines to run primarily on less expensive and cleaner-burning natural gas.

For one, Hybrid Fuel had $2.4 million in debt and had not patented technology essential to the company’s future. Just as troublesome, the conversion kits often were cobbled together, making it difficult for customers to reliably retrofit huge fleets of vehicles.

The company hopes to receive CARB and EPA approval in the next few months.

ALL CASES WHERE MEDIUM OR HEAVY DUTY DIESEL ENGINES ARE REPLACED BY LPG VEHICLES LEAD TO EITHER INCREASED ENERGY USE OR INCREASES IN EMISSIONS OF CO2-EQUIVALENT GREENHOUSE GAS!!!

ADDITIONALLY THERE ARE PROBLEMS WITH P.A.H. EMISSIONS WITH GASEOUS MIX FUELS SUCH AS GENERAL LPG AND CNG.

IT IS ALSO MISLEADING TO QUOTE EMISSION TEST FIGURES FOR LIQUIFIED NATURAL GAS AND COMPRESSED NATURAL GAS AS ONE SET OF FIGURES, AS THE EMISSION SPECTRUM CHARACTERISTICS FOR THE TWO FUELS ARE VERY DIFFERENT!!!

Dear Sir/Madam,
We are very much interested to import CNG TANK & FULL KITS
Requirements are:
Size 140 mm
Capacity 60 to 90 liter
Use for car/micro

Waiting for your good reply

Where can I modify my car for use with Natural Gas and Gasoline?
Are there any NG filling stations in South Florida?

Where can I modify my car for use with Natural Gas and Gasoline?
Are there any NG filling stations in South Florida?

I am working for my Ph.D on liquified natural gas run disel engines. My questions are:
1. Where can I get the conversion kit for running the diesel car
2. What are the probable exhaust problems
3. What are the possible recent serious problems u have come across
4. Do v have to change the injectornsystem

Looking for your favourable reply

please notify me about the possibility of modify the gas engine model cat g3512 to diesel engine
thanks,,,

I leave in Florida and I have a Ford E-350 Van (15 passengers) and I would like to know if it is allowed, by law, and possible to convert to natural gas my engine and the cost for. Also, I need to know if can I keep both systems and your store in Florida.
Thank you
Nelson M Filho

I leave in LA, CA and I have a Volvo 960 gasoline engine car and I would like to know if it is allowed, by law, to instal in it natural gas kit and the cost for. I leve near natural gas station so filling up my tank wont be a problem.

Where can I find a natural gas conversion kit for my gasoline engine automobile?

Kindly send us complete detail of your kit along with other information.

I wish to convert 2000 Disel Generator in to LPG or CNG. Please advice me where I will get the total solution.

I have access to a free natural gas well. Do I have to compress the gas to use it in a car? (do car engines exist that burn the gas without compressing)
If not, is it feasible to compress it for use in a couple cars, or are compressors very expensive and hard to maintain?

Thank you for the help,
Tim

I have access to a free natural gas well. Do I have to compress the gas to use it in a car? (do car engines exist that burn the gas without compressing)
If not, is it feasible to compress it for use in a couple cars, or are compressors very expensive and hard to maintain?

Thank you for the help,
Tim

Hi. Yes, you do need to compress the gas to use it in a car or truck. You also need gas tanks to hold the compressed gas in your car and a fueling mechanism that allows you to pump the compressed gas to vehicle tank without leaking, in addition to the components in a retrofit kit such as that noted above.

Honda is selling a home compressor/refueling appliance for its natural gas cars. (Hook it up to your gas line, compress and fill. You might want to contact them to find out about it, and also ask specifically about using it with a non-Honda car.

I have a car that has been modified with a second gas tank for natural gas. But I can't find anyone who sells it. I'm in western SD right now, but will be visiting Sacramento, CA in August. Anyone know a place in either state or along the route that sells it? PLEASE e-mail me!
Steve

i m interested to import diesel kits for in all ranges for Pakistan.we have also set up in Dubai.

Looking for a conversion kit to run vehicles off of propane/natural gas for a carb. not fuel injection.