The Nashua Telegraph reports that the high price of heating oil and petroleum-derived fuels is driving up the use of firewood in New England as a heating source.

Demand for firewood is up across Maine and northern New England this season, driving firewood prices to unprecedented highs. Even in the nation’s most heavily forested state, some dealers have had to scramble to find enough raw supply to cut into logs.

The strong demand has pushed prices to levels never before seen, said Peter Lammert of the Maine Forest Service. Seasoned firewood is now selling for roughly $180 to $230 a cord, and green wood goes for $145 to $160. Lammert said prices a year ago were in the $140 to $160 range.

Lammert, who has been following the firewood market for decades, said he expects demand to be even higher for next winter.

“If Iraq and Kuwait and Iran all blow up, the price of oil could just be terrible,” he said. “If Americans had the gas prices Europeans have, we wouldn’t drive the vehicles we do. And if oil prices stay as high as they are, we won’t be heating the whole house with oil.” 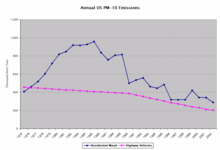 Residential wood burning (RWB)—even with EPA-approved stoves—produces a host of undesirable emissions, including large amounts of PM-10. According to EPA data, wood burning consistently has produced more PM-10 pollution than do highway vehicles. (See chart to right, Click to enlarge.)

Following the oil crisis precipitated by the Iranian revolution in 1979, RWB PM-10 emissions spiked to more than double those from highway vehicles. That emissions delta has dropped in subsequent years, although in 2002, RWB still contributed 1.4 times as much PM-10 as did highway vehicles.


The air district and the California Air Resources Board plan a joint effort to reduce particulate matter. We can reduce this pollutant in our neighborhoods by eliminating wood-burning in fireplaces and woodstoves. — Jack Broadbent, Executive Officer, BAQMD (Letter to SF Chronicle)

Yet people need heat, and will respond to market economics. The combination of reliance on oil for transportation and rising prices (coupled with imminent peak production) will cause secondary effects such as this increase in RWB, and the concomitant impact on health.