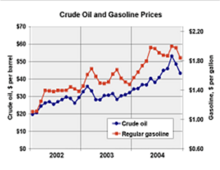 Despite high and volatile prices, U.S. petroleum demand in 2004 grew at its strongest rate in five years, reported the American Petroleum Institute in its 2004 year-end Monthly Statistical Report. The surge in demand resulted partly as a result of strong demand for highway diesel.

Demand for on-highway diesel fuel gave it the single largest percentage gain among the major market segments for petroleum products.  Moreover, with increases in deliveries across all major products, total petroleum deliveries (a key measure of demand) rose 2.3% in 2004, their largest annual increase since 1999.

Other highlights of the report:

This is not the right direction in which to be moving.

I want to do business with your great company but dont know where to start, VIEWING THE WEB SITE OF YOUR COMPANY,i will like to make a proposal to your company for sales of product or exchange of commodity.BLCO,LPFO.
PLEASE CONTACT ME.

I would like to do business with your company.I currently have lpfo for sale.You seem to be very experienced in the Industry going by your very detailed website.Please contact me.We can do alot together.

We can sorry the following products: Copper cathode, Rebco, BLCO and LPFO. Contact us if you are interested.