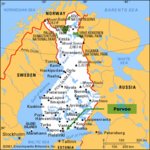 The plant, which is due to come online in the summer of 2007, will have an annual capacity of approximately 170,000 tons of biodiesel—roughly 3,500 barrels per day.

We are the first oil company to successfully develop a biodiesel production process and to build significant capacity for it. We are ahead of our competitors and, once the plant is in operation, we will be able to produce considerably better biodiesel products than are currently produced by other manufacturers. In recent emission tests carried out by two leading heavy duty automobile manufacturers, our new biodiesel proved to be the best.

There is currently no significant commercial biodiesel production in Finland, according to the European Biodiesel Board. An output of 170,000 tons would catapult Finland into fourth place in Europe behind the 2004 production capacities of Germany, France and Italy.

The European Union has set a biofuels target of 5.75% of total gasoline and diesel consumption (energy content) by 2010.

Hello, we are activie in the field of Stabilizing Biodiesel with our BAynox Biodiesel Stabilizer. The product is well accepted on the German market for Biodiesel from rapeseed, animal fat, waste cooking oil and foreing vegetable oils.

Without an antioxidant stabiliser most Biodiesel producer have problems to reach the 6h Stability norm of the EU on rancidity.
for details see www.baynox.com

I NEED SOME COMPANIES THAT BUILDING BIODIESEL PLANT,FOR TO BUILDING PLANT IN COSTA RICA, CENTRO AMERICA.

THANK FOR YOUR TIME

I NEED SOME COMPANIES THAT BUILDING BIODIESEL PLANT,FOR TO BUILDING PLANT IN COSTA RICA, CENTRO AMERICA.

THANK FOR YOUR TIME