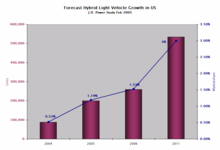 A new report from J.D. Power forecasts that the market share of hybrid vehicles in the US will top out at 3% by 2010. The  J.D. Power-LMC Automotive Forecasting Services Hybrid-Electric Vehicle Outlook predicts rapid growth in hybrid sales, expecting more than 200,000 units to be sold in 2005, 260,000 to be sold in 2006, and 535,000 by 2011. That last figure represents approximately 3% of the projected market.

Despite the significant growth in the number of models and annual sales over the next five years, we anticipate hybrid market share to reach a plateau of approximately 3 percent near the end of the decade.

This is related primarily to the price premium of $3,000 to $4,000 that consumers must pay for a hybrid vehicle, compared with a comparable non-hybrid option, and to competing technologies such as more fuel-efficient gasoline and diesel options that will be available after 2006.

That would leave all other automakers to split the remaining 25% of the market. Ford is probably not too happy about that projection, given that (a) they already have a hybrid on the market and (b) have laid out a timeline for the rapid introduction of four more hybrid models.

Also of note is the apparent positioning of diesel as significant US player starting next year. J.D.Power-LMC also seem not to be considering the possibility of a diesel-hybrid. Again, both GM and Ford might have some disagreement with that, given their diesel hybrid concepts released at NAIAS, not to mention the Mercedes S-class diesel hybrid.

Also, have they not considered that "the price premium of $3,000 to $4,000" might go down for a multitude of reasons: mass production, technological breakthroughs, government giving more incentives to buyers (maybe after realizing that climate changes are coming harder and faster than they thought), snowball effect of more hybrids on the market = more sales (critical mass), higher prices of gas, etc.