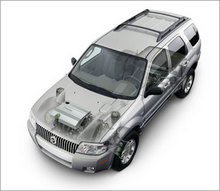 Earlier this year, Bill Ford announced that production of the Mercury Mariner hybrid would be moved up a year to the his fall. Now the company has released initial details about what will be its second hybrid SUV.

Based on the hybrid powertrain from its cousin the Escape Hybrid, the Mariner Hybrid delivers an estimated 33 mpg (city), 29 mpg (highway) and is targeted to meet California’s Advanced Technology Partial Zero Emissions Vehicle standard—the cleanest a fossil-fuel vehicle can be.

Combined, the gas and electric hybrid partners provide an effective 155 peak horsepower from 35 mph to the speed limit, yielding performance that feels similar to a V-6-powered Mariner, especially during passing maneuvers. 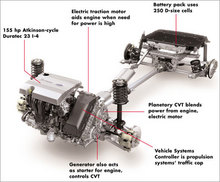 Engine. The hybrid’s engine is 40 pounds lighter than the standard version of Ford's Duratec 23 2.3-liter engine. The block and head are aluminum and the engine uses a friction-welded plastic intake manifold as a further means of reducing weight. Finally, the piston, ring and connecting rod assembly is 15% lighter than comparable modern engines. Lower weight aids both fuel efficiency and acceleration.

Like the Escape Hybrid and the Prius, the Mariner engine uses an Atkinson combustion cycle.

The Atkinson cycle here uses late-closing intake valves so that in the initial stage of the compression stroke (when the piston begins to ascend), part of the air that has entered the cylinder is returned to the intake manifold, in effect delaying the start of compression and reducing the effective compression ratio. This allows, in other words, the expansion ratio to exceed the compression ratio while retaining a normal compression pressure.

The result is an engine that is thermally more efficient and that thus improves fuel efficiency, but at the cost of sluggish low-end torque and acceleration.

The electric traction motor in the hybrid, however, more than compensates for the loss of low-end torque.

The Mariner hybrid engine switches off at low speeds and light loads to conserve fuel, allowing the electric motor, with an effective 94 hp, to handle propulsion up to speeds of 25 mph. The engine can also shut down during coasting and while the vehicle pauses at a stoplight to further reduce unnecessary fuel consumption.

Motors. Mariner Hybrid uses a compact permanent magnet traction motor that operates on AC power drawn both from the generator and battery pack (via a power inverter that converts stored DC to AC). It offers peak power of 70 kW (equivalent to an extra 94 hp).

The 28 kW (38 hp) generator motor generates current to recharge the battery pack, feeds the traction motor during heavy-load situations, and handles stop/start. The generator also controls the drive ratio in the transaxle’s planetary gear set to enable the gasoline engine runs at its most efficient load and rpm as often as possible.

Ford said the numbers for Mariner will be small, maybe 1000. They say they are just making a statement with Mariner.

This is why Ford is in trouble, they think they can make a statement like that, and because they said it it is true. The car buyer makes these decisions not a wrong way corrigan at Ford Motor Co.

Toyota gets it, the public creates the demand, the public says how many vehicles will be sold, you must listen to what the car buyer is saying.