At the 2005 Geneva Motor Show, DaimlerChrysler is emphasizing its strategic commitment to the development and introduction of Biomass-to-Liquid (BTL) synthetic diesel fuel—which it calls SunDiesel.

BTL is essentially a variant of the Fischer-Tropsch process that uses biomass as a feedstock. 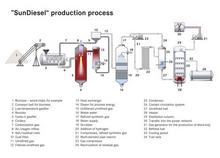 The production process of SunDiesel BTL (diagram at right) allows for fine-tuning and adaption to specific engine requirements. As DaimlerChrysler researchers work to enhance the performance of diesel engines via new combustion processes and newly designed injection units, while concomitantly reducing emissions even further, they are also factoring in the potential of synthetic fuels.

Fuel quality is a constructive element of engine research, which we take into account and benefit from in the development of new power units. ‘SunDiesel’, which is free of sulfur and aromates, is a technically ideal fuel which complements the engines of the future in an environment-friendly manner.

In Germany, biofuels are exempt from tax until 2009, so that the production costs for SunDiesel, which are currently almost three times as high as petroleum diesel, could be offset and the fuel marketed at competitive prices.

DaimlerChrysler is committing to delivering its diesel vehicles to customers from the factory  with a tank filling of BTL as soon as it becomes available in sufficient quantities.

The USDA estimates that BTL may replace up to 13% of Germany’s current diesel use. (Earlier post).

Biodiesel is currently the most popular biofuel in Germany, with an estimated annual production capacity of 1.1 million tons in 2004 and actual sales in 2004 of 323,000 tons.

The combined process of energy conversion and Fischer-Tropsch synthesis, however, is energy intensive—and more so when using biomass as a feedstock than natural gas. On a Well-to-Wheels basis, BTL diesel is far better from a greenhouse gas emissions perspective than any other variant of synthetic or conventional petroleum fuel (except for DME from biomass) or conventional biofuel, but the worst in terms of energy requirement.