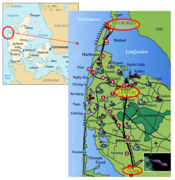 The Engineer reports that three Danish towns in Ringkøbing Amt (county) in Western Jutland—Vemb, Lemvig and Thyborøn—will put up funding for a hydrogen-fueled train running along the 59 km railway line connecting them.

The county of Ringkøbing is home to a number of renewable energy projects. Ringkøbing Amt faces westward to the North Sea, and has some of the best wind resources in Denmark. Wind power provides approximately 35% of the electricity for the county. Currently, a fourth of the Danish production of biogas is from this region and plans are underway to build one of the biggest biogas plants in the world. A new test center for wave energy has been developed to the north.

The county is also the seat of Denmark’s Hydrogen Innovation and Research Center (HIRC).

HIRC has proposed a number of hydrogen projects in the area, the train being but one.

HIRC has proposed two phases to the project. The first phase would use a hydrogen-fueled internal combustion engine (natural gas engine). The second would be to move to a fuel-cell system.

The center estimates that a single 1 MW windmill could produce the hydrogen required for two train sets.

According to the CEO of HIRC, Jens-Chr. Møller: “Our goal is to get Europe’s first commercially viable hydrogen train in Europe. There are many international projects on using hydrogen in cars and buses, but plans on hydrogen trains are very few and mostly centred in the US and Japan.”

With money at hand, HIRC now hopes to attract the attention of train manufacturers interested in participating in the project.

While back in the USA, the "geogreens" are encouraging nuclear, this article is a breath of fresh air. Thanks Mike for digging this stuff up for us!