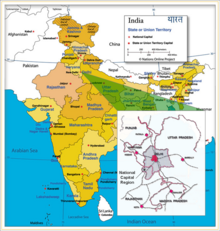 Times of India. The Supreme Court of India has ordered the extension of mandated CNG use in heavy vehicles from Delhi to the National Capital Region (NCR) surrounding the capital city.

The Supreme Court directed the neighboring states of Haryana and Uttar Pradesh to open an adequate number of CNG outlets in the NCR to support the switchover of heavy duty commercial and transport vehicles from diesel to CNG.

The NCR consists of the National Capital Territory (NCT) of Delhi and delineated areas from the surrounding states.

The SC also directed MCD and Delhi Police to ensure that no truck used Delhi as a passage for going to other states. When both Haryana and UP said that they would suffer huge sales tax losses by switching over to CNG, the Bench directed the Union government to meet officials from the two states on this issue and hoped that an amicable solution would be found.

Some research indicates that the while levels of SO2 in Delhi have dropped, NOx levels have increased by as much as 20% during peak periods since 2002 due to an increase in the number of vehicles in the city and from industrial sources. (Earlier post).