The Zoé uses a new 1.2-liter turbocharged 4-cylinder gasoline engine that delivers 73 kW (98 hp) of power and maximum torque of 145 Nm (107 lb-ft). Although Renault did not provide fuel consumption figures, CO2 emissions are targeted at less than 140 g/km, and the vehicle is Euro-4 compliant.

The gasoline engine will likely appear in upcoming versions of the Clio and Twingo range. The current 1.2-liter gasoline engine in the Clio, for example, delivers 60 kW power and 105 Nm torque, with 143 g/km of CO2, and combined (city/highway) fuel consumption of 6 liters per 100 km (39 mpg US). Renault apparently has improved power 22%, torque 38%, and kept fuel consumption at the same level or slightly lower (based on the CO2 figure). 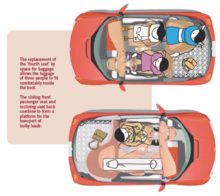 Renault opted for a 3-seat configuration with extra storage (depicted at right) because:

It has been shown that cars carry only 1.4 people on average, but two seat interiors are perceived as a constraint. Zoé is therefore a genuine three-seater complete with a boot located behind the driver’s seat, all built into a compact architecture.

The Zoé is an interesting approach to providing consumers with a smaller car, yet storage beyond a two-seater.  Also interesting to note is the 1.4 people/car figure. Perhaps 3-seat configurations will become acceptable for a segment of consumers.