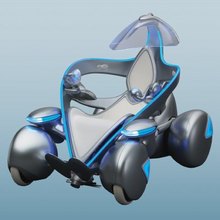 The concept vehicle had appeared earlier at the Tokyo Motor show last year.

The components are made with decomposable and recyclable materials to reduce impact on the environment.

The i-unit operates upright in low-speed mode, but reclines to a more horizontal stance (shown at right) when at high speed. The resulting lower center of gravity ensures more stable handling.

More details as they come.

Mike, FYI there is a 404 error on your previous Toyota link.

The ITS acronym - Insane Transport System.

"Why, with cars running on ITS, we can comfortably ignore impacts, inequities and burdens that motorized travel imposes upon the underclass consumer, the wage-slave and the common slave; and profit handsomely"

How fast does the i-unit go in both upright and reclined modes?