A Physicist’s View of the World’s Energy Situation

Well, not just any physicist. Dr Steven Koonin, who was appointed BP’s Chief Scientist last year, appeared at a recent public Colloquium at Fermilab to discuss some of the technical, economic, and social considerations surrounding the challenge of ensuring adequate energy supplies in an environmentally acceptable manner.

Koonin is currently on a leave of absence from his faculty position as professor of theoretical physics at Caltech to serve as Chief Scientist for BP. He held the position of Provost of Caltech from 1995 to 2004, and was Chairman of the Faculty from 1989-1991.

Koonin is a member of the Council for Foreign Relations and has served on a number of advisory committees for the National Science Foundation, the Department of Energy, and the Department of Defense and its various national laboratories. He is a fellow of the American Physical Society, the American Association for the Advancement of Science, and the American Academy of Arts and Sciences. His research interests include theoretical nuclear, many-body, and computational physics, nuclear astrophysics, and global environmental science. 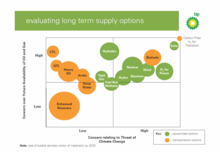 The talk moves rapidly, and coalesces around two primary concerns:

On the supply question, he strikes a balance between what he characterizes as the geologist’s argument (Hubbertian peak oil) and the economist’s (rising prices stimulate greater development and eventually a transition to a new fuel source).

From Koonin’s point of view, there are plenty of hydrocarbon stocks available—the question is the technical ability to produce them in a sufficient and environmentally acceptable manner. The chart to the right represents a conceptual plot of the different sources of energy and their relative materiality by 2030 on a quadrant defined on one axis by concern over hydrocarbons and on the other by concern over climate change.

(Note the position and size of hydrogen in its transportation role. There is an interesting exchange on that in the Q&A session.)

In this context, he sees a potential sustained cap on oil prices at around $40 per barrel—the approximate market price at which the BP teams tell him Fischer-Tropsch (FT) synthetic fuels become competitive.

(Upward variance in that price would, I assume, come from a supply/demand mismatch of the synthetics, which, absent a monumental push, wouldn’t pick up the slack in supply soon enough.)

On the whole, Dr. Koonin seems more concerned about the affects of climate change than about the ability to deliver energy supplies.

And ultimately, resolving what is certainly a tightening situation—either from the supply side or the climate change side—requires active participation and support from the public and the government.

The biggest forces in society are public opinion and the government...

Demand side intervention, to use the jargon, has got to be a piece of the picture. So who wants to cut the size of their house in half?...Can I buy the other half? [joke]

It really is, in the end, about people’s expectations about lifestyle and so on. That’s what’s got to change. It’ll be tough.

The streaming archive of the talk and the presentation are available here.

His position looks quite realistic, though he doesn't mention how the prices of solar and wind etc. are dropping exponentially, which would seem quite relevant!

This topic is not beautiful,meaning not so interested topic also the contents...
I,m not happy of this selection...
for my only suggestion in this topic is kindly restudy this I mean all of this!!!!!!!!!!!!
ugly,i'm so verry dissapointed for what i had read!!!!