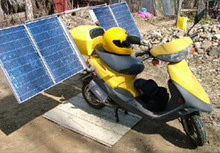 Treehugger writes about one of its readers who created his own solar-charged EVT 4000E electric scooter (Do-It-Yourself (DIY) Solar).  According to Dominic, the writer, Don (the DIY’er) has lived off the grid for 20 years, and this bike is a natural extension of that lifestyle.

To pull off this feat, he installed two sets of folding panels that generate 120 watts/hour in good sun. The bike’s batteries hold 2,400 watts, so a Michigan summer’s 9 hours of daily sun charges the battery about ½ full. Don estimates his ride uses only 25% of that. So, even the occasional cloudy day (unfortunately, not uncommon in Michigan) doesn’t mean the bike is dead. But, just in case, the factory charging apparatus is still intact.

In order to ride, the panels fold in close to the body of the bike, and lock down. When charging, the panel’s symmetric layout reduces the possibility of tipping in the wind (though Don tells us he is considering adding parking outriggers to protect against this). He also plans to add a protective skin to the sides of the panels to protect against gravel on unpaved roads.