U of Minn Launches Wind-to-Hydrogen Project 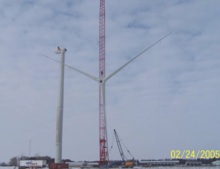 Minnesota Gov. Tim Pawlenty and other dignitaries dedicated the only public large-scale wind research instrument in the United States designed to conduct research on converting wind power into hydrogen.

The 1.65 MW research wind turbine will sit on a 230-foot high tower.  Each blade is 135 feet long. The turbine begins producing electricity when the wind speed reaches 7.8 mph at 230-feet and will reach its maximum production of 1.65 MW at wind speeds of 29 mph. Researchers at the University of Minnesota West Central Research and Outreach Center (WCROC) in Morris, the turbine’s location, estimate that based on local wind conditions, the turbine will produce 5.6 million kilowatt-hours (kWh) of power each year.

(The picture at right, from WCROC, shows the turbine in the final stages of assembly.)

The electricity presently is delivered to the nearby UMM campus, supplying some 50% of its power use, and any remaining goes to the grid. the hydrogen project will divert that surplus into electrolytic production of hydrogen.

This system will explore the use of renewable hydrogen in applications such as  fuel cells and localized fertilizer production. In the future, the facility will conduct research and demonstration projects on wind energy storage and on-demand renewable energy systems such as biomass and biodiesel generation, in addition to hydrogen fuel cells.

The production of hydrogen using wind-generated electricity is projected—long term—to be one of the least expensive and cleanest options for creating the gas.

The wind-to-hydrogen project at the WCROC has received initial funding from the state Commerce Department Energy Office, the Legislative Commission on Minnesota Resources, Xcel Energy and the university’s Initiative for Renewable Energy and the Environment (IREE).

This sounds a bit like the "hydrogen village" project in Atlantic Canada. http://www.macleans.ca/topstories/news/shownews.jsp?content=n042147A

It does. Thanks for the link to the Canadian project.

Thanks for all the information. Wind turbines are designed using the principle of aerodynamic modeling so as to extract maximum wind energy. Wind turbines of small size are used in telecom towers, remote monitoring and rural schools and clinics where there is no facility of electric grid.