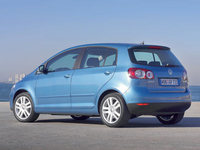 Volkswagen is combining its diesel Golf Plus 2.0 TDI with its direct shift gearbox (DSG) to deliver up to a 10.6% reduction in fuel consumption and lower emissions compared to a Golf with a five-speed automatic transmission.

The DSG is essentially two gearboxes in one, combining the comfort of an automatic with the agility and economy of a manual unit. The six-speed, transversely mounted DSG has two wet clutches (offering a higher thermal load tolerance than dry clutches) with hydraulic pressure regulation. One clutch controls the odd gears plus reverse, while the other operates the even gears. 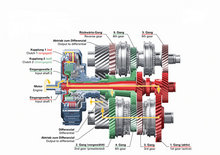 This dual approach enables the next-higher gear ratio to become engaged but on standby until it is actually selected. In other words, if the car is being driven in third gear, fourth is selected but not yet activated. As soon as the ideal shift point is reached, the clutch on the third-gear side opens, the other clutch closes and fourth gear engages under accurate electronic supervision.

Because the opening and closing actions of the two clutches overlap, a smooth gearshift results and the entire shift process is completed in 40 milliseconds.

Volkswagen is optimizing the DSG for diesel engines, working on features such as pulling more powerfully from low engine revolutions.

In its combination of the new Golf Plus TDI and DSG, Volkswagen refined the fuel injection system to perform more precisely for the initial (pilot) and main injections. This, combined with other enhancements, improves the engine characteristics at idle and at low loads—improvements of which the DSG can take advantage.

The increased pulling power at lower revs ensures that the engine torque required is always available. The commencement of injection is brought forward through “dynamic pilot control” so that up to 15% more torque is immediately available when needed during fast gear changes.

As a result, the engine turns over considerably less than it would with a conventional gearbox to carry out the same work, and decreased engine revolutions reduce fuel consumption.

All together, a good example of the ability of the increasing sophistication of electronic engine management combined with new approaches can deliver further improvements in fuel economy.

How much saving compared to a five-speed manual?

I don’s have figures on that yet. The Plus 2.0 TDI is due on sale in select European countries approximately mid-year.

But it might be close to comparable. Last year’s standard Golf with 2.0 TDI and manual is rated at 5.7 l/100km.

I am picking up a new VW Touran (available where I am in the UK) with the 2.0 TDI (140PS) with DSG box on Tuesday (10th May). Have test driven this combo - and they certainly seem made for one another.

When will this be available in the US and will it pass California state regulations?

I am in the UK and surfed past this site. I drive the Golf DSG and it is superb. The auto shift is extremely smooth and a good match to the 1.9 diesel. On a long cruise it delivers >55mpg (UK gallons!) Diesel Fuel is 90 pence a litre here so that makes a big difference to the fuel bill compared to my thirsty Ford Auto.

will this model run on biofuel? If so, will it need any modifications?

I have a 2005 Golf TDI and it just turned 50,000 miles. I change oil and filters, including oli filter, fuel filter and air filter, per maintenance schedule every 5K miles,. The car was making about 40 mpg (US) but after I changed tires at 50K it suddenly dropped the millage to 34-35 mpg. The tires are pumped per spec and they are identical replacement of the original set. Is there anything else that I should know or do? Can someone help?
Thanks

How do I change oil and fuel filters on 2005 Golf TDI?

Do I have to change fuel and air filter every 5K?