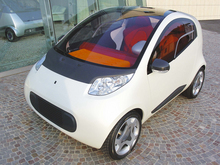 Treehugger reports on Pininfarina’s work to develop a safer small car— one that, as Treehugger puts it, removes the sense that:

...driving in a small car can make you feel like some tiny rodent in a predator-prey relationship...

In the event of a head-on collision, the vehicle absorbs part of the energy with the deformable front section of the chassis, constructed of two metal struts with internal plastic foam absorbers.

These components are shaped as truncated cones in order to dissipate the energy over the cellular sheet metal firewall, which in turn transfers the energy along the central tunnel and the side members.

The remaining energy, due to the mass of the passengers and the sled, shifts the sled itself forward and compresses the two honeycomb absorbers between the rigid cell and the dashboard of the sled shell, resulting in the gradual and controlled deceleration of the passengers.

Smaller absorber elements may also be fitted between the rear of the sled and the rigid cell, to provide occupant protection in the event of a rear-on collision.

According to Pininfarina, computer simulations of crashes with the Nido system showed that thanks to the mobile sled system, the deceleration sustained by the occupants during a collision is low enough to render the use of airbags unnecessary in certain cases.

To guard against injury in T-bone collisions (lateral crash), Pininfarina uses a larger than usual underdoor side member that incorporates a number of crashbox elements to absorb energy in a lateral collision.

Despite the larger size, the side member is designed so that it does not impede access into the car. The concept developed by the Nido project also includes the use of suitably sized transverse structures in the sled near the dash and at the base of the seats, which transfer lateral impact energy from one side of the car to the other. As a consequence, the doors rest on these transverse structures, an arrangement which also prevents door intrusion.

All that said, increasing the safety of drivers and passengers in smaller cars—of which there will probably be an increasing number—will require design changes on the part of large vehicles as well.

As researchers concluded in a paper presented at the 17th International Technical Conference on the Enhanced Safety of Vehicles, in 2001:

To reduce the number of vehicle fatalities there must be a paradigm shift in thinking in regards to the crashworthiness design of the whole transport system rather than individual sub-components such as a sedan vehicle. No longer can the car and occupants be considered as an isolated system crash tested in a pristine laboratory environment in accordance to a certification procedure that in some cases bears little relationship with reality.

I am interested in your small cars especially the Pininfarina's Nido. Pls forward me your prices.

I LIKE YOUR CONCEPT CAR NIDO VERY MUCH AND I WOULD LIKE TO KNOW MORE ABOUT THIS CAR. CAN YOU SEND ME MORE INFORMATION ABOUT THIS NIDO CAR?. IAM VERY MUCH ENTHUSIASTIC TO KNOW MORE ABOUT THIS CAR IN THE SENSE ITS PRICE, SPECIFICATIONS OF THE CAR,MATERIAL USED IN MAKING THIS CAR,WHAT WERE THE PROBLEMS THAT YOU FACED WHILE MAKING THIS CAR, WHAT COULD BE THE PROBLEMS THAT ONE HAVE TO FACE?.
PLEASE SEND ME REPLY AS SOON AS POSSIBLE, I AM VERY EAGER TO KNOW THESE ANSWERS.
THANKYOU!!!!!!!!!!

I would also like more info about this car. Is it electric, gas or diesel? Will it acomodate a 6' 6" person? Does it have any trunk space for the normal shopping, etc.

I LIKE YOUR CONCEPT CAR NIDO VERY MUCH AND I WOULD LIKE TO KNOW MORE ABOUT THIS CAR. CAN YOU SEND ME MORE INFORMATION ABOUT THIS NIDO CAR?. IAM VERY MUCH ENTHUSIASTIC TO KNOW MORE ABOUT THIS CAR IN THE SENSE ITS PRICE, SPECIFICATIONS OF THE CAR,MATERIAL USED IN MAKING THIS CAR,WHAT WERE THE PROBLEMS THAT YOU FACED WHILE MAKING THIS CAR, WHAT COULD BE THE PROBLEMS THAT ONE HAVE TO FACE?.
PLEASE SEND ME REPLY AS SOON AS POSSIBLE, I AM VERY EAGER TO KNOW THESE ANSWERS.
THANKYOU!!!!!!!!!!

I saw your auto on "Future Cars" on the "Discovery Channel" on TV. I like what I see. I would like to know more. Thank you.

I like the nido alot. It appears to have a large door openning will it accomadate a 6'3" man with a 52" waist. I would also like to know the price and aviliblity in the U.S. specificly Omaha Ne. Thank You

I ALSO WOULD LIKE TO KNOW THE PRICE AND HAVE HUSBAND 6' 4" WOULD HE FIT COMFORTABLY? WILL IT BE AVAILABLE IN THE STATES SOON?

I was intrigued by the “Smart Car” however, after watching a presentation on the NIDO on the discovery channel, I would like to learn more about them, when they will be available and how much they will cost.

i like the car a lot, wondering if you can send me the price and more info.
thanks in advance,
sak

I've seen article dating back to 2004 on your vehicle. Three years later — is it on the market yet? When will it be available in the U.S.?

The first time I saw the NIDO I fell in love with it I wanted to know as much about it as possible. I really wanted to know if I could possible get one for my own or even if I could get one at all. Please send me more Info.
Dominic Kirchgessner

I like the Nido design very much! Is it available? How much does it cost? Please send me more info, I'm really interested in this car.

i like this car its very beautiful colourful iwant some other information about this specially price materials use in it.i want to buy this.i am from pakistan send me message or call me at [009203076450971]plz iwait for ur reply hardly

I think I have taken crash safety farther than even the Nido.

Two Detroit consultants have given me a thumbs up, but the auto companies have rejected my ideas.

Please send my web site to your friends and family and get some internet buzz going. Maybe the car companies will change their mind.

What's the latest on this neat little car?
Will it ever be available or will it always just be a dream?

The car is superb.I would like to know more about this "rodent" looking car.Is it really safe to drive in cities like Delhi?

Very interrested in the Nido...I see no price list? Can you send me that info?