Designs for rotary engines go back as far as Agostino Ramelli’s 1588 proposal for a rotary piston water pump.  By 1910, the British Patent office held more than 2,000 patents for rotary-type pumps and engines—all presumably unsuccessful.

It was Felix Wankel who finally came up with a functional design for a rotary combustion engine (RCE) and determinedly took it to market in the 1950s. The result became known at the Wankel, and enjoyed a flurry of applications for several decades.

The Wankel replaces the piston and cylinder of a conventional engine with a three-cornered rotor turning in a roughly oval chamber. As the rotor turns, it performs the stages of the four-stroke cycle: air intake, compression, combustion and exhaust. As a consequence, a Wankel has fewer parts, runs more smoothly, and is lighter and more powerful for its size than a piston engine.

The Wankel had two major drawbacks: relatively high emissions and poor fuel economy. The combination of the oil crises of the 1970s and the focus on cleaning the air through emissions control caused most automakers (with the exception of Mazda) to cancel their Wankel plans. GM, which had been so enthusiastic, stopped Wankel development in 1977.

It was a Wankel engine, however, that was used in the first modern US prototype of a gasoline-electric hybrid: a 1972 Buick Skylark using a powertrain built by Victor Wouk and Charlie Rosen (who started Petro-Electric Motors around the concept).

The reason I wanted a Wankel engine is that it was squat for the same amount of horsepower as a conventional piston engine. And as I mentioned, I didn’t know how much electronics I would have to put under the hood or how big an electric motor, so I wanted something that was squat, and Mazda’s Wankel engine fitted this requirement absolutely beautifully.

As I always said, the hybrid is the way to go if—if, if, if. If we must reduce automobile pollution and reduce automobile fuel consumption a large amount in a short period of time, the only thing you should do is use existing technologies, base your design on existing technologies, and as these technologies improve, even when you’re implementing the design and improving your design, you just go ahead. The principle was proved by our tests at the EPA. But nobody did anything about it until, independently, the Japanese—Toyota and Honda—did it.

Mazda continued to work with the Wankel, reducing its fuel consumption and emissions. The company is introducing a hydrogen-fueled version to be followed by a hydrogen-fueled rotary-electric hybrid. (Earlier post.)

But other companies and inventors continue to tackle the problem of designing an efficient rotary combustion engine without the fuel consumption and emissions issues of the Wankel. As an example, the vertices of the three-cornered Wankel rotor are difficult to seal. Some newer designs try to do away with the corners altogether.

Some of these engines are already in use in non-automotive applications. Not surprisingly, many are now looking toward gaseous fuels, and new combustion regimes (such as HCCI) as entry back into the auto limelight.

One such is the Rand Cam engine now being developed by Reg Technologies.

Invented by James McCann in 1983, the Rand Cam uses a disk-shaped rotor with two or more axial vanes mounted perpendicular to the direction of rotation. The vanes slide back and forth against cam surfaces to alternatively expand and contract the chamber volume.

Through the process of these sliding vanes, combustion chambers form between the rotor, stator walls and vanes where the fuel/air mixture is injected, compressed, combusted and exhausted.

Increasing the number of vanes increases the number of combustion events throughout a revolution. The original Rand Cam had two; the current version has 12.

The engine operates at lower speeds than a typical Wankel engine (less than 2,000 rpm) and at higher compression ratios.

The company recently announced that it has completed several successful, continuous combustion tests using gasoline fuel and a unique vane design that does not require vane tip seals. (Sealing remains an issue, as with the Wankel.)

The company notes that eliminating the need for vane tip seals will reduce the manufacturing and maintenance costs significantly.  The Rand Cam engine design will be further tested for generator and hybrid car applications.

Reg Tech is currently testing a Rand Cam diesel engine as the genset engine for a series hybrid electric car. 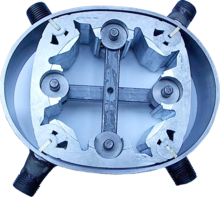 On the other end of the ambition scale, a different approach is taken by Quasiturbine, first patented in 1996. The Quasiturbine proposes the use of a deformable four-face rotor without a crankshaft instead of the three-faced Wankel rotor (with crankshaft) that is designed for an optimal variant of HCCI.

Indeed, the Quasiturbine inventors see this family of designs (as there is more than one possibility) as the next major evolution of combustion engines. “Inspired by the turbine, it perfects the piston, and improves on the Wankel.”

In one offshoot of the theory of the St. Hilaire family designers, Quasiturbine engines could even eliminate the need for energy storage in hybrids, as the Quasiturbines would theoretically be so efficient at low speed.

There are some prototypes of the Quasiturbine engines being developed, but nothing yet in transportation.

Inventing, designing, prototyping and succeeding in manufacturing a new type of engine can take a great deal of time. Wankel conceived of his idea in 1924, received his first patent in 1929, received his patent for what would become the prototype in 1936, was interrupted by World War II, created a company, and finally had a running prototype of what became the Wankel engine in 1958. Roadtested in 1960, the engine was used in the Wankel Spider in 1964. Forty years from concept to car.

Considering the uncertainties of long-range prediction and judging solely by lowest life-cycle energy use and greenhouse gas (GHG) releases, there is no current bias for preferring either fuel cell (FC) or internal combustion engine (ICE) hybrid powerplants for mid-size automobiles over the next 20 years or so using fuels derived from petroleum or natural gas. That conclusion applies even with optimistic assumptions about the pace of future fuel cell development. Hybrid vehicles are superior to their non-hybrid counterparts and their advantages are greater for ICE than for FC designs.

...if it is important to make signgificant reduction in fleet energy use and GHG emissions during the next 20 years, then improved ICE vehicles offer the quickest and easiest techmology options to realizing those objectives.

Rotary Combustion Engines, with their higher power for a given engine density, are an interesting prospect for hybrid applications. If fuel consumption and emissions issues are satisfactorily resolved through design innovation or engineering breakthroughs, they may be able to play a renewed role.

A small quibble - the Wankel-powered Buick Skylark was a 1972 model. Buick dropped the Skylark name for the 1973 model year and didn't resurrect it until 1980, I believe.

Aack. You’re correct. Change is made. Thanks.

I have a design that I am trying to patent that uses the magnetic field to develop torque. I need sponsors. If my design works, we will no longer need fossil fuel for our travel needs. Please help me.
If you would like establish a dialogue concerning this topic, please call me at 281-685-2819 or email me at jim.rush@amec.com
Jim Rush

The bladeless turbine invented by Tesla could also be used in hydrids. It it made from a stack of smooth disks with exhaust holes near the center. Expanding gas enters at the edge of the disks and spirals in towards the center, giving up kinetic energy to the rotor on the way.

The usual advantages of a turbine include:
- Clean, continuous combustion
- Fuel flexibility (anything that burns)

Also and advantage for this turbine:
- Very simple design

You guys with the magnetic engine and bladless engine, if you get buyout offers from oil companies don't take them. Refuse and resist their tyranny. If they start not liking 'no' and bring in the layers (and maybe mobsters but probably not), you can always share it on emule P2P once you feel like you can't win against their laywers and lawsuits. They will do such a thing. Go lookup up Gary Gygax's Mythus Dangerous journeys on google. Try http://www.cs.ucr.edu/~jimv/tca/dj.txt . Google can save your work if they start sueing. You will need to anticipiate at least a month in advance, and its gotta be interesting to normal people (non programmer/engineer geek). Emule and like P2P is a highly international environment and it will be very difficult if its massivily spread across several borders before the unfavorable settlement or the guilty verdict (they will win unless they have absolutly 0 evenidence).