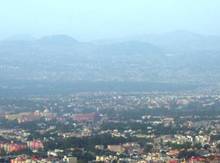 A year-long joint US-Mexico demonstration project is reducing PM emissions in a test fleet of 20 Mexico City buses by 90% and NOx emissions by 10%. More widespread implementation of the technology may be hampered by a lack of Ultra Low-Sulfur Diesel (ULSD) fuel, however.

The Mexico City Diesel Retrofit Project is a joint effort between the US EPA, the Mexican Ministry for Environment and Natural Resources, the Mexico City Center for Sustainable Transport, the government of Mexico City and the World Resources Institute.

EPA and the World Resources Institute awarded grants totaling $511,000 to the Center for Sustainable Transport for implementation of the work.

The project—which was the first such international project for the EPA—is designed to demonstrate how the combined use of ultra low-sulfur fuels and retrofitted PM filters and oxidation catalysts can improve air quality and reduce impacts to public health. The project was similar to diesel retrofit projects now underway in U.S. cities including Seattle, New York City, and Washington, DC.

The retrofit project was intended to determine how well the technology would work at Mexico City’s 2,160 meter- (7,200 foot)-altitude.

The test fleet consisted of 12 buses equipped with particulate traps and 8 with oxidation catalysts. The fuel was imported 15 ppm Ultra Low-Sulfur Diesel.

PEMEX, the Mexican national oil company, isn’t yet able to produce its own supplies of ULSD that would enable more widespread deployment of the technologies.

PEMEX currently is producing diesel at 250 ppm, down from 500 ppm, and is shooting for 50 ppm by 2008—but which will require an investment in its refineries of some US$2 billion.

Mario Molina, a native of Mexico City who shared the 1995 Nobel Prize in Chemistry for his work in atmospheric chemistry, particularly concerning the formation and decomposition of ozone, and who is coordinating a 10-year project to improve air quality in the city, suggests that the cost of upgrading Pemex’s refineries to produce the cleaner diesel could be recovered gradually with a surcharge on the fuel.