Mitsubishi Motors announced that it will begin selling electric cars in Japan in 2010. 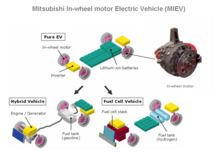 Mitsubishi will build its EVs with in-wheel motors and lithium-ion batteries, both of which the company has been working on for several years. Mitsubishi forsees using the Mitsubishi In-wheel motor Electric Vehicle (MIEV) concept in hybrids and fuel cell vehicles as well.

Mitsubishi Motors has already built several test vehicles using lithium-ion battery systems, including the Mitsubishi HEV in 1996, the FTO-EV in 1998 and the Eclipse EV in 2000. The FTO-EV set a multiple-charge 24-hour distance world record on a proving ground, while the Eclipse EV covered over 400 km on public roads on a single battery charge.

The company currently is using a modified Colt as its EV testbed. After removing the combustion engine, fuel tank and transmission, Mitsubishi fitted two 20 kW in-wheel motors with 600 Nm (443 lb-ft) torque each to the rear wheels.

Mitsubishi currently has its test Colt EV on the proving ground.

The car will undergo a tuning program with independent control of drive torque and braking force for left and right wheels to improve dynamic performance. After receiving vehicle type certification, Colt EV will undergo verification testing on public roads.

Mitsubishi will use on-road testing to identify and resolve any problems unique to the in-wheel motor vehicle, including any deterioration in road holding and ride comfort due to increases in un-sprung weight, as well as reliability and durability issues in the in-wheel motor system and its peripheral components (suspension, wheels, tires).

The company is also currently developing a more powerful a 50 kW in-wheel motor for 4WD vehicle use that will eventually feature individual drive torque and braking force control for each wheel.

Mitsubishi will displaying the Colt EV at the 2005 Automotive Engineering Exposition to be held in Yokohama from May 18 through May 20.

This is a welcome development. For Mitsubishi, which has been dogged by quality problems, fault cover-ups and low sales, this offers a way to re-establish itself as a technology and market leader. (Opportunity is one thing, the ability to execute is another. We’ll have to see how things develop.)

But more broadly, a mainstream automaker is re-inserting the EV into the dialog of the market at a time when other automakers are crushing (or trying to crush) their older EVs.

It’s unfortunate that the release date is five years away, and that Mitsubishi currently has no plans to offer the EVs outside of Japan. But introduction dates can be advanced, and sales plans can expand, based on customer demand.

It will be interesting to see if any of the other automakers pick up the challenge.

Could the unsprung weight penalty be reduced or eliminated by making the *least* powerful hub motors neccessary for the application? This could be a critical bit of info that results from Mitsubishi's test program, and which would be of use in all applications of hub motors.

Wow. I will start saving my coins in hopes the vehicle makes it to production and the US. This is what the industry has needed, someone willing to take the risk "and make a business out of electric vehicles"

As a person who once drove an EV1, I'll be in touch with Mitsubishi to beg for an EV. As the secretary of the Florida chapter of the Electric Auto Association, I'm very glad to see such basis for our growing membership!

Many people don't know that its really much better to have EV, than ICE vehicle. Auto companies are dolls in oil tycoons hands and will resist untill jinny is out. I think only chinese have real chance of making EVs due to their
oil lobby is weaker and Chinese gvmt. might be interested in that too. Ohh, count me in if this car sees Canadian
dealerships.

hey im too lazy to read this but, does this web site tell me how electric cars work???

Hello,
I have found out an unknown new power that can be usefull for movement, producing electricity and ... .
for example ,by means of that
power a car can run about 300 miles whitout any kind of fuel or other energy
such as electric charging.that car can produce electricity during its
movement.it means that you can run a car freely. nobudy knowes this power and anything like that.
it is not expensive and can be used simple and whitout any danger to nature.
It can be a revolution in the oil industry
this power can be change to electrisity for electric motors(so the engine of the car should be changed to electric motor and battry is needed) or change to another type of powers.
I am trie to use it on normal engin so my car can run with oil and save about %50- %70 of fuel without any battry or electric motor.
I have tested that on my car with normal gasolin engin and could save just %15 of fuel but
i am sure with enogh tools and good desine I will make a car with saving %50 - %70 of fuel.
please let me know your idea about that.
I am await for your answer.
thank you ,

Our company, Ridgewood Trading, LLC is looking for an electric car, 4 to 6 person capacity. Is there a shop in the UAE that anyone can point me to? Please reply, if you have any info. My contact addy:
Abelito Suizo
Procurement Officer
Ridgewood Trading, LLC
M-014 Al Safeena Bldg.
Oud Metha Road, Bur Dubai
Dubai, UAE
Tel.: +97143359728
Fax : +97143359729

I've being wating for this since the EV1 were crushed by GM.

I my self want the EVO.

with this information i search manufacturer or investor for my invention.
I have making a new Battery generator. My inventive not need to charge and give us12v&24v&48v DC electric. Also not need to any fuel. And same time/ give us like generator (AC) electric. I had been testing it, for 30 days, it was work for 30 days without any problem. Especially I have making for electric auto. And possible, to use anyplace too.
to have dc electric1- (mA) 2- maximum 5.5 W
to have ac electric 1- 2.5 A up to 4 A 2- 50 W up to 300 w 3- 250 v

India is a big market. I intend to collaborrate with one who has technical know how.

can I expect help?

Note:Interference -- Should my(URL) web addresses become blocked
by a "vBuddy" pop-up, click on its top blue bar and pull it down
and over to the left and click on its "x" in the right hand corner.
-----------------------------------------------------
Once in my web site -- http://trillions.topcities.com --
go down to number 2 for Electric cars, number 3 for my high
speed dual mode maglev system that many crooks are trying to steal ,
and also go to number 7 for a globally owned energy system.
Without these concepts we are just spinning our wheels and going
nowhere. Please pass this info to all potential interested parties
around the world. Thank you and all the best
Sincerely Jack Marchand
PS -- Should your company want more input contact me.

Note:Interference -- Should my(URL) web addresses become blocked
by a "vBuddy" pop-up, click on its top blue bar and pull it down
and over to the left and click on its "x" in the right hand corner.
-----------------------------------------------------
Once in my web site -- http://trillions.topcities.com --
go down to number 2 for Electric cars and "one minute" battery 'quick-swap' stations, number 3 for my high
speed dual mode maglev system that many crooks are trying to steal ,
and also go to number 7 for a globally owned solar energy system.
Without these concepts we are just spinning our wheels and going
nowhere. Please pass this info to all potential interested parties
around the world. Thank you and all the best
Sincerely Jack Marchand
PS -- Should your company want more input contact me.

I have invention record[since/25/7/2000/ register N.5865/in syria] of electrical system install in electric-car its load 1 ton and we try to make the load greater.the invention supplies the electric-car with its need of electricity permanently day and night during parking and driving .by using this system ,could produced friendly environment electrical-cars [with the same specifications of the using cars now]free from exhaust gas and not need oil or fuel there is no need to stop car for battery recharging[recharge battery automatical].this system can be used in the production of electric generators with different power .we ready to agreement with you ,and to execute invention in my laboratories. because I have not enough money.The invention depend on electro-magnetic capacity addition moment of inertia [two parts{ mechanical part} ,{electrical part}]

the invention consist of new electric - charger[my design ] and two groups of batteries.

the employ materials [iron,copper,plastic] my purpose from these invention to make the air is clean ,[in other apply possible use it to provide the factories by its electric[ use it in the stationary case easier than the mobile case] if we execute the invention possible say good-by smoke and pollution, possible you sent watcher to see and finance,

to explain the invention we need to long meeting because it not easy. unable to explain it by writing in any way we use in it the gravity law ,the electro-magnetic capacity ,moment of inertia ,levers laws ,we consume the electric power and gravity power to produce electric quantity more than consumed electric power and we consume all the used gravity power ,as you know the gravity power is free I can not explain more. transport price possibly become
approximately free may use it in the ship
designer