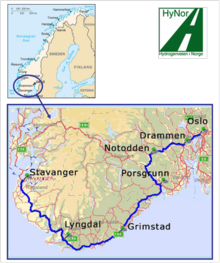 Norway is allocating NOK 48.6 million (US$7.5 million, €6.0 million) for testing alternative fuels and environmentally friendly technology. Of that, 62%—NOK 30.2 million (US$4.6 million, €3.7 million)—will go to the HyNor project, which wants to build a hydrogen highway between the cities of Oslo and Stavanger.

HyNor is a Norwegian joint industry initiative to implement demonstrations of a hydrogen energy infrastructure along a route of 580 kilometers (360 miles) from Oslo to Stavanger during the years 2005 to 2008. The project  will touch on the multiple steps required to develop a hydrogen infrastructure and will include demonstrations of various hydrogen production technologies and uses of hydrogen, adapted to local conditions.

Christopher Kloed from Norsk Hydro is leading the project. Some NOK 16.2 million (US$2.5 million, €2.0 million) is targeted for Hydro’s establishing a hydrogen filling station in the industrial area of Grenland in Porsgrunn. The filling station may be located in close proximity to Hydro’s research park there, and could utilize surplus hydrogen manufactured by established industry in the area.

Norsk Hydro electrolyzers were used in the first hydrogen station on Iceland, opened in 2003. The electricity used during the electrolytic process there is obtained from Iceland’s natural geothermal and hydroelectric energy sources.

I am try to get more infomation on your HyNor project .So we in ameraca can model after you . I love this idea

Why no pics of hydrogen powered cars?

I hear the hydrogen is packed in units and I read somewhere the autos equipped for hydrogen were getting 480+kmm per unit.

Is this right and could that be converted to miles per unit?

Credit to Norway for being the first to implement the use of Hydrogen properly. Need to demonstrate success to USA Presidential candidates.