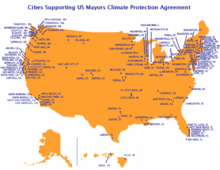 The New York Times reports that New York Mayor Michael Bloomberg has joined the bipartisan US Mayors Climate Protection Agreement coalition. The coalition, organized by Seattle Mayor Greg Nickels, is working to achieve what would have been the Kyoto Protocol’s US target for reductions in greenhouse gases (7%) in the member communities.

With New York City joining, the number of mayors supporting the agreement is up to 132, representing 28.8 million citizens in 35 states.

The coalition has grown quickly from its founding on 30 March 2005 by Nickels and nine other mayors:

Under the Agreement, participating cities commit to take a number of actions, including:

Mayor Nickels and the other participating mayors are seeking to wind the endorsement of the US Conference of Mayors during the upcoming meeting in June.

This map looks like the Red vs. Blue states map.