The Volvo Group has unveiled its first truck equipped with a DME (dimethyl ether) engine.

This represents Volvo’s second-generation heavy-duty DME vehicle. Volvo Truck Corporation and Volvo Bus Corporation built an earlier (1996–1998) prototype DME bus for testing and demonstration of the low-emissions and high-efficiency capabilities of the fuel.

The field test was not concluded since the reliability of the fuel system did not meet the target set to perform the test and only one bus was made.

The new truck, introduced in conjunction with the Synbios conference on biofuels in Stockholm, is a Volvo FM model equipped with a conventional 9.4-liter, inline 6-cylinder diesel engine with a modified fuel system adapted for DME.

The work is the result of a cooperative research project, half funded by the European Union, between Volvo, AVL, TNO (a Dutch research institute), Danish Technology University,  BP and Växjö municipality. This  Alternative Fuel For Heavy Duty vehicles (AFForDH) project ran from 2002 to the end of 2004 with a budget of close to €4 million (US$5.1 million).

(As an aside, the 7th International DME Association Meeting was held in Stockholm one day prior to Synbios and in the same venue.)

DME (dimethyl ether) is an LPG-like synthetic fuel that is produced through gasification of various renewable substances or fossil fuels. The synthetic gas is then catalyzed to produce DME.  DME is particularly attractive for Sweden, as it is possible to use black liquor, a residual product from production of paper pulp, as the feedstock. (The energy balance of DME—and other synthetics derived from a gasification process—depends on the process and feedstock choice.)

DME is a gas that becomes a liquid under low pressure (i.e., like LPG). It has excellent characteristics as a compression ignition fuel; the primary work that needs to be done is on the fuel-injection system because of the different handling characteristics of the gas. 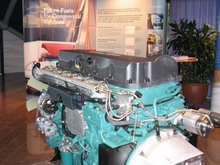 Volvo’s new DME engine  (pictured at right) uses a low-pressure, common rail system, with an injection pressure less than 20% that of an equivalent diesel engine. A special fuel pump and sealing materials are designed to work with the DME gas.

For exhaust handling, the engine uses long route exhaust gas recirculation (EGR), with the gases introduced at the turbo inlet. This is possible because the gases have close to zero PM. Emissions from the engine are lower than the future Euro 5 standards, according to Volvo.

Even prior to optimizing the engine and support systems, fuel consumption is, in energy equivalents, almost similar to a diesel truck, according to the company.

Volvo will build another three DME trucks in 2006 for further testing and evaluation.

DME can offer a number of advantages compared to other alternative fuels:

On the downside, DME offers some technical challenges compared to some other alternative fuels:

Nevertheless, Volvo’s studies indicate that DME has the potential to become a highly competitive alternative to today’s fossil fuels. One of the most significant arguments for DME is that it is among the lowest in emissions, including CO2 and particles.

DME (CH3–O–CH3) has no carbon-carbon bindings and 35% of the molecule consists of oxygen. In principle, this will give no PM formation from the fuel, although some will be derived from the lube oil.

NOx formation will be lower due to the oxygen content and the lower temperatures in the flame compared to diesel fuel combustion. The emission of hydrocarbons (HC) (mainly unreacted DME) and some higher order of ethers, can be oxidized using a conventional oxidizing catalyst.

We know that in 20 years, alternative fuels will successively become increasingly commercially viable. Energy efficiency will become decisive and DME is truly an energy-efficient fuel. A result of this energy efficiency is lower environmental impact and reduced operating costs.