ZAP and its technology partner Apollo Energy Systems announced the successful demonstration of an on-board ammonia reformer—the“Ammonia Cracker”—to produce hydrogen for use in a ZAP-Apollo alkaline fuel cell (AFC)-powered vehicle.

In August 2004, ZAP announced a partnership with Apollo to develop a prototype alkaline fuel cell car based on the Smart cars that ZAP imports and modifies.

Apollo’s fuel cell technology can jump start the hydrogen economy. The easiest and least expensive way to move Hydrogen from Point A to Point B is to use ammonia. Seventy-five percent of ammonia (NH3) is hydrogen. Ammonia can be added inexpensively as a component of today’s gas stations, without costly hydrogen extractors, allowing the refueling of fuel cell cars today, years ahead of other hydrogen solutions. 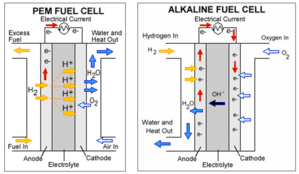 Alkaline fuel cells (AFCs) were one of the first fuel cell technologies developed, and were widely used in the US space program to produce electrical energy and water onboard spacecraft. (Apollo Energy Systems has decades of experience with AFCs and a long history of fuel cell vehicle prototypes).

AFCs use a solution of potassium hydroxide (KOH) in water as the electrolyte and can use a variety of non-precious metals as a catalyst at the anode and cathode. In the AFC, hydrogen reacts with hydroxyl ions (OH-) at the anode to produce water and electrons. The electrons flow through the external circuit to return to the cathode, where they react with oxygen to create the hydroxyl ions.

In a PEM cell, hydrogen is split at the anode, with protons traveling across the membrane to the cathode where they combine with oxygen and the electrons (which have travelled to the cathode from the anode via an external circuit) to create water.

AFCs offer a number of benefits. They are extremely efficient, and do not need to rely on the precious metal catalysts that contribute to high prices in PEM cells. AFCs operate well at room temperature, and have a good cold start capability.

However, they are easily poisoned by carbon dioxide, the presence of which in either the hydrogen or the oxygen stream leads to the formation of carbonate crystals, capable of blocking the electrolyte pathways and pores.

This vulnerability has, in the past, required that both the hydrogen and the oxygen used in the cell be purified—an expensive process. Even the small ambient amount of CO2 in the air can affect the cell’s operation.

The approach that Apollo and its collaborators at the Graz University of Technology (Graz, Austria) are taking to address this is to use a simple absorbing tower (with soda lime or amines) to remove CO2 from air, and to use a recirculating electrolyte to minimize the absorption of CO2. The use of the on-board ammonia reformer for hydrogen production delivers a hydrogen stream with a consistent purity.

ZAP also has a PEM fuel cell vehicle project underway, this one with Anuvu as its partner, and is targeting production of the vehicle sometime this year. (Earlier post.)

Search for in all major search engines simultaneously on the site http://www.iknowall.com.
Simultaneous search on Google, Yahoo and MSN Live Search.

Search for in all major search engines simultaneously on the site http://www.iknowall.com.
Simultaneous search on Google, Yahoo and MSN Live Search.

We are better off today than we were eight years ago