Prof. Nigel Schofield (Manchester University), the project leader, is presenting a paper describing the project this week at the IEEE International Electric Machines and Drives Conference (IEMDC) in Austin, Texas.

The purpose of the project is to explore the potential for using a small fuel cell stack in conjunction with a more robust energy storage system—essentially using a plug-in hybrid architecture to downsize the fuel cell stack. This theoretically can reduce the cost and engineering issues attendant with an application that relies upon a fuel cell for primary power.

Accelerating a 2.5-tonne London taxi from a set of lights requires something like 80kW peak power. If you went to a total fuel cell solution, you would have to have 80–100kW worth of installed fuel cell on the vehicle, and the cost, mass and volume of that would not be commercially competitive, as compared to a hybrid solution.

The Foresight Vehicle Initiative is administered by The Society of Motor Manufacturers and Traders Limited (SMMT).

Each battery has its own associated charger which connects to 240V, 50Hz supply for overnight or downtime opportune charging.

The Zebra Z5C battery, with its ceramic electrolyte, has an operating temperature of around 300°C (572ºF)—the battery pack thus needs to be enclosed in a thermally insulated box, and is bulky. Hence, it tends to turn up applied in larger vehicles. ISE Corporation, for example, has used Zebra packs in its hybrid buses. 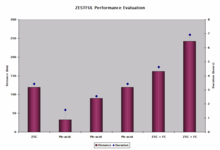 The electric cab will start track testing later this year.

This project will provide some insight into the long-term viability of a plug-in architecture, and points the way to perhaps a more tractable way to phase-in the use of fuel cells.

GM staunchly pushed for batteryless, non-hybrid fuel cell architectures, due to lower cost. Ford followed suit, but changed to hybrid FC in the last few years. The cost of any large storage hybrid is tough to swallow. Cost aside, the most easily realized would be a self-reforming SOFC range extender running on methanol.

I hear you on the cost issue (those Zebra packs are not cheap)—but wouldn’t the increase in the energy storage cost be offset by a decrease in fuel-cell stack cost?

I’d like to find some cost analysis on different architecture and application options...

Why not go further and make the taxi EV only. I mean this could be done NOW and test of of fuel cell version for the future can carry on. Doing this while legislation making EVs the standard fo London taxis would help curb pollution in the city. The city situation of the taxis suit an EV very well and the taxis can have several charge stations within the city. London can say bye bye to polluting diesel taxis forever along with leading the world in EV.