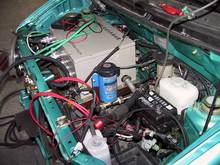 At last October’s Challenge Bibendum (earlier post), China was notable in its focus on electric vehicles—20 of the 24 EVs at the Shanghai event were Chinese.

Not that generating more electric demand is a good short-term strategy for China, which is suffering from its grid’s inability to keep pace with rapid growth. But planners are paying attention to the benefits of electric vehicles from an emissions point of view, especially in China’s large cities and industrialized areas. The country, to judge by the activity at the Challenge, is working hard to develop strategic competence in this area.

Now, TianJin QingYuan Electric Vehicle Company, which participated in the Challenge with two earlier EV car models, announced that it has shipped six of its Happy Messenger electric autos to the US.

The Happy Messenger is not going to wow buyers. It is rather slow, and has a limited range (although certainly sufficient for in-city excursions). Nevertheless, the basics are all there (see under-the-hood, above), functional and developed indigenously.

In 1972 (or thereabouts), other Asian firms (Japanese, that time) sent over odd, clunky-looking little vehicles that were timed perfectly for the onset of the oil crisis. The rapid shift in buyer demand from large, gas-swilling American cars to fuel-parsimonious Japanese compacts was dramatic, and provided the salient into the US market the Japanese manufacturers needed. Once given that toehold, the manufacturers rapidly improved their offerings—and their marketshare. And now look where we are today.

In this market, it’s certainly not a foregone conclusion that China will be able to replicate the Japanese reshaping of the US auto market. (That said, the lower cost of labor in China makes it likely that Chinese-made vehicles (especially small vehicles) will be sold in the US—by US-based vendors if not by Chinese. Both outcomes are already being openly discussed.)

But the concentration on the electric powertrain and the necessary support systems (power management, energy storage, etc.) will give Chinese engineers a broader base of experience. Experience that is also applicable in hybrids and fuel cell vehicles. When another opening in the market appears as did in the 1970s, it’s quite likely that Chinese manufacturers will push to step into that breach. And they may do it partly with electric vehicles.

Where is the nearest dealer to Seattle WA.?
Thank you, Doug.

I’ll try to find out more on distribution, etc.

I would like to take this opportunity to introduce my company to you.
We are one of the few pioneers in China that distribute electric vehicles worldwide.
We also exclusively represent a leading Chinese EV manufacturer on international market.
We have exported our products to USA, EU, South America, South and Southeast Asia etc.
We have business relationships with many big players in the EV business. We also have OEM contracts with some big name customers as well.

Please feel free to contact me if you need any information or a price quotation.

If it's made in China and cheap, you bet it'll be sold at your local Wallie Mart in no time!

We believe that, your country has been generous for inventor and encourage them from vested interest, as you are one of the advance countries in the world, who understands the revolutionary technology.

I am introducing myself as Mr. M.I. Gajjar. I am an inventor, I have made an automobile equipment. It is very much helpful to mankind and your country.

Details are as under: -
I have invented ELECTRIC VEHICLE KIT/ FORMULA. It works with eight batteries.
These batteries are rechargeable.

VERY IMPORTANT POINT TO BE NOTED
For the use of this equipment you have to simply remove engine, radiator and silencer from vehicle.
If you have a car that have only 4 wheels and brake, then by using this equipment and batteries. You can drive up to 300 Kilometers with single charge. The most powerful benefit of this car is that it’s free from pollution.
Sir please make a note that if you have other electrical vehicle then using my kit in your car you can increase efficiency of your car up to 50% (e.g. if your car run up to 100 K.M. then using my kit it runs up to 150K.M.)
If you are interested in our invention or want to collaborate with our company or purchase this formula or if you can provide any type of guidelines towards this then please contact to the following address or call me.

Can you send more information in the equipment you are talkin about? We are young trading company looking to introduce pollution free car in India small towns. We don't have any unit at present, still we are going to make the car frame in TamilNadu. We are intending to introduce 1 model initially. Let me know the price of the unit.

Your nearest dealer can be found ion Yangliuqing China, about, go west on on I-90 until you reach water, the pass the Olympic National Park, until water again, then continue about 3000 miles west to North Korea, cross it and continue on water until you see Beitang, the continue another day or two until you find Tianjin. There ask any local for the dealer nearest to Seattle...

The six they sent to US and another six that they might have there would cover the demand you are helping to increase...

Dear Sir,
I am intrested to know more about electric 4 wheelers and 2 wheeler vehicles for INDIA you may visit my web URL page , so kindly inform me urgently. My e mail address is ; gav_master007@yahoo.com,gav_master007@hotmail.com,
gavmaster007@gmail.com

SCAM! Linking website...don't waste your time...get real info on EV conversions by using google and a LOT of reading.

Very much interested to handle the electric vehicle line for the whole Middle East. Please check our website and asdvise if you are free to offer us the line in the following countries:

The delightful surprising auto!!!!
When it will be possible to buy in Ukraine?
How about service in the Ukraine/Europe?
P.S.Are You going to play a couple “Happy Messengers” in lottery? I would buy a few tickets !!!
Best from Ukraine,
Bogdan Yosava
ecobyos@gmail.com

WE ARE INTERESTED IN KNOWING MORE ABOUT YOUR PRODUCT

It is important to find other likeminded alt fuel inovators. I'm intrested in going forward with EVs.
Greg

we have just improved our EV,it now ranged 150kms per charge and the top speed at 90KM/h,we hope that you will injoy it.

we have just improved our EV,it now ranged 150kms per charge and the top speed at 90KM/h,we hope that you will injoy it.for more info, pls see www.emotorschina.com and e-motor-cn.com

we have just improved our EV,it now ranged 150kms per charge and the top speed at 90KM/h,we hope that you will injoy it.for more info, pls see www.emotorschina.com and e-motor-cn.com{http://www.google.com}