The UK Energy Saving Trust has asked Connaught Motors to represent sustainable vehicle technology at the Climate Change—Focus on Scotland conference opening tomorrow (6 June). EST has contributed some £500,000 (US$906,000; €741,000) to the development of the V-10 mild hybrid power plant for the Connaught Type-D Coupe.

Unveiled as a concept last year, the Connaught Type-D is designed to be a high-performance hybrid, with the emphasis on sportiness and handling (true to the Connaught heritage), rather than fuel savings. (Connaught helpfully offers an alternative to “hybrid”: “HigherBred.”)

The new 2.1-liter V-10 engine gets an assist from a 48v electric motor coupled with a supercapacitor system for energy storage. The hybrid has a target of 42 mpg (UK) (35 mpg US) on the combined test cycle, with CO2 emissions of 150 g/km.

The mild hybrid configuration—the electric motor always assists the engine, never propelling the car on its own—offers three modes for electric motor use:

In March 2005, tests of the hybrid drive system using a Ford Mondeo gasoline engine, rather than the V-10, demonstrated an overall reduction in CO2 emissions of almost 15% over the performance of a regular petrol engine. Application of the V-10 should provide further fuel and emissions savings.

The all-aluminum, ultra-compact, 2,110cc V-10 engine offers a number of innovative design features. With a V-angle of just 22.5 degrees, the engine is narrow and balanced with even firing intervals. The wet cylinder liners mate directly with the cylinder head, with no gasket, and other components are sealed with rubber where necessary. 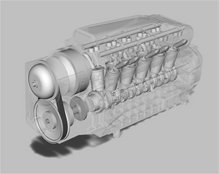 The crankshaft is pressed together from 22 components, and fed into the block from one end. Its webs double as very large main-bearing journals, but the bearing surface is very slender to keep friction down.

Ceramic piston crowns reduce the heat transfer to the engine block. That heat transfer would otherwise be one of the biggest difficulties for the V-10 configuration, given a cylinder surface-to-volume ratio much higher than that of, for example, a four-cylinder engine. Connaught has speculated about future V-8 and V-12 versions of the engine.

For a rapid warm-up and maximum efficiency, the cylinder head has its own water-cooling circuit. When the block needs to be cooled as well, an interconnecting valve opens to unite the cooling circuits, pumped by an electric water pump as required. There are two valves per cylinder, a single overhead camshaft per bank with bucket tappets and variable valve timing system, and a very high (13.5 to one) compression ratio. Cross-linking of opposite inlet ports produces pressure pulses to improve low-speed torque, and each cylinder has its own throttle valve.

The engine alone reaches its torque peak at 4,000 rpm, but with the electric motor assisting its efforts, the powertrain offers a flat torque curve of 144 lb-ft from 1,000 rpm right up to 6,000 rpm. The strong low-end torque is the secret to the hybrid’s zippy performance. Maximum combined power of 162 bhp is at 6,000 rpm.

The Lynch electric motor is attached to the crankshaft nose via a variable gearing system designed to exploit the fact that an electric motor delivers its highest torque at its lowest speeds. The drive system ensures that the motor always runs at the best speed for the conditions. It is powered by, and recharges, a 48-volt electrical supply, which keeps current levels low and makes for quicker recharging. There’s also a capacitive and fast charging storage system to respond instantly to big current demands, for example to help with sudden acceleration.

The Type-D uses stop-start functionality to shut down the engine when stationary and then restart upon the engagement of the clutch.

One problem with turning an engine on and off, is the cooling down of the  catalytic converters cool down, causing excess emissions when restarting. To overcome this, the Type-D has heated catalysts powered by the 48-volt electrical system. They need an excess of air just after start-up to make them “light off” again. This is neatly achieved by cutting the fuel supply to two cylinders for a few revolutions, so they act as an air pump.

Thus equipped, the Connaught Type-D should meet Euro 4 emissions, and could qualify as an ultra-low emissions vehicle in the US were it to be sold there (for which there are no current plans).

(A hat-tip to Jack Rosebro!)