The zinc can be used in zinc-air batteries or be used to produce hydrogen by reacting it with water vapor. In both cases the zinc recombines with oxygen and zinc oxide is produced, which can be reused in the solar reactor to produce zinc once more. (Click on chart at right to enlarge.)

In essence, the process stores solar energy in a transportable metal carrier that then can release the energy as electricity or hydrogen.

The consortium consists of the Paul Scherrer Institute (PSI), the Swiss Federal Institute of Technology Zurich (ETHZ), the Weizmann Institute of Science, and others. Weizmann started working on this in 1997, but it was in 2001 that funding from the EU kicked in to the SOLZINC project.

The first trials of the solar power-plant have used 30% of available solar energy and produced 45 kg of zinc an hour, exceeding projected goals. During further tests this summer the team hopes to achieve a higher efficiency. The consortium projects efficiency levels of 50%–60% for industrial-size plants. 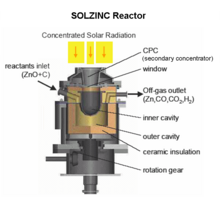 The process uses a two-cavity reactor design. Zinc oxide (ZnO) is combined with coal, coke or carbon biomass and placed into the outer cavity—the reaction chamber. An array of heliostats reflects solar rays to a hyperbolic mirror attached to the solar production tower, which in turn reflect the rays through a secondary concentrator in the reactor.

The solar radiation heats the inner cavity, which then indirectly heats the outer cavity. The sun’s rays are concentrated on this mixture by a system of mirrors. The zinc forms as a gas which is then condensed to a powder.

Straight thermal dissociation of ZnO requires operating temperatures above 1,750ºC. (And PSI is working on a solar reactor for that as well.) However, the use of a carbonaceous material as a reducing agent (e.g., coal, coke, biomass) reduces the required operating temperature to between 1,000ºC–1,400ºC. The SOLZINC process operates at approximately 1,200ºC.

One side-effect of operating at the lower temperature with carbon as a reactant is the release of CO2. The research team determined that:

My CRC handbook lists the melting point of ZnO as 1975° C (the boiling point of metallic zinc is ~900° C).  Also, your text says the offgas is CO2 but the graphic says it is CO.

I had mixed reactions reading through this until I had understood the whole thing.  I'm going to have to blog some thoughts on this; the production of CO from the reduction step and the ability to produce hydrogen from the metallic zinc multiply the possibilities.

We are taking up a project of planting moringa oleifera plants, numbering 40 million in 40 hactares of land at village Lavachha -Gujarat state ,India .
There will be 12 crops of leaves at 30 days by cutting and recutting .The leaves amounting to 943 metric tons per year per hactare .

tell me the detail about this

please i want you to send me a detailed information on how solar energy can be used to heat a confined space at any time of the day.

Solar energy is really remarkable energy source for me though solar power is not available at all times because the amount of sunlight that arrives at the Earth's surface is not constant. It depends on time of day, time of year, and weather conditions.