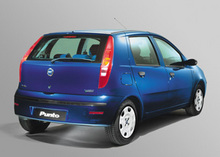 The Swedish Association of Green Motorists has voted the Fiat Punto Natural Power as the “Best Environmental Car 2005” in Sweden. (The award page is here, but in Swedish.)

The Punto Natural Power is a dual fuel car with two independent fuel systems: natural gas and gasoline. The vehicle starts on gasoline, then automatically switches to natural gas. The driver can change fuel manually at any time with the touch of a button. When the natural gas level drops to near zero the car switches automatically back to gasoline.

In 2004, The Municipality of Gothenburg became the first public authority in Sweden to purchase it for its fleet—the municipality’s Technical Service departments have purchased 130 units.

The Swedish government has set a quota of 90% minimum environmental impact vehicles in all public fleets by 2008. In support of this, the government has already established 53 CNG fuel stations, mainly in the South of the country, where 90% of the population and industry is concentrated (17 of these stations are in the Göteborg area).

Two CNG tanks with a capacity of 60.6 liters are located in the trunk and can store up to 11 kg of CNG, giving the vehicle a range of 260 kilometers (162 miles) on the combined cycle. (In the transparency diagram to the right, CNG systems are in red, gasoline in green.)

Only some 300 Punto Natural Power units have been delivered to the Swedish market. Fiat anticipates that municipalities in Sweden may opt for the Punto as they make fleet purchase decisions in the coming months.

Launched in 1993, the Punto has become a popular vehicle with 40 different configurations. The six millionth Punto rolled off the assembly line in Italy at the beginning of June.