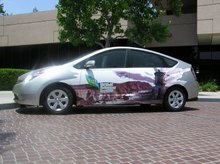 In another example of its effective environmentally-focused marketing, Toyota is the exclusive automotive sponsor of UN World Environment Day 2005, and the Prius is the official car of the event.

It’s exciting to be involved in this important event building environmental awareness and to have the Prius represent what’s already available in the way of environmentally-friendly vehicles. Holding the event in San Francisco is fitting as the city is home to one of the largest municipal Prius fleets and to the largest Prius dealer in the country.

World Environment Day, which opened today, is being held in the United States for the first time ever in its 33-year history. The agenda consists of special events across the city focusing on urban environmental issues while mayors from around the world will meet for five days to celebrate green cities and create a plan for a sustainable urban future to be called the San Francisco Urban Environmental Accords.

Posted on 01 June 2005 in Conferences and other events, Hybrids, Vehicle Manufacturers | Permalink | Comments (0)