Toyota Motor Corporation (TMC) announced global cumulative sales of its hybrid vehicles have topped the 3-million mark, with more than 3.03 million units sold worldwide as of 28 February 2011 since sales began in 1997.

In Japan, TMC launched the Coaster Hybrid EV in August 1997 and the Prius in December. Sales of the Prius began in North America, Europe and elsewhere in 2000. Next came the second-generation Prius in 2003 and the expanded use of TMC’s hybrid system on such vehicles as minivans, SUVs, rear-wheel-drive sedans and hatchbacks. The third-generation Prius went on sale in May 2009, and the global cumulative sales of TMC’s hybrid vehicles topped 2 million by the end of August the same year.

TMC plans to introduce 10 new-model hybrid vehicles by the end of 2012, including six newly launched vehicles and 4 vehicles that have been redesigned. TMC is committed to augmenting this lineup even further and increasing the number of countries and regions in which it sells hybrid vehicles. 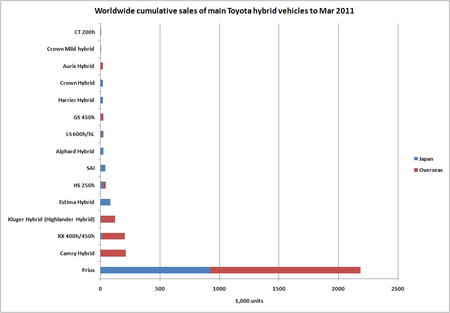 It is mainly Prii, and it is mainly in Japan (of late).
This suggests that people buy hybrids as badges, rather than for saving fuel.
If it was about saving fuel, you would expect a wider range of cars, and more overseas.
We may see that change if oil stays expensive, but if it goes back down, it will revert to the badge buyers.

So they may have to develop a "Prius" brand and sell cars as "Prius MPV", Prius mini etc (which they may already be doing).

It is a good car, especially the current version (it really does save fuel) - they just need to break out of the "do gooder" box.

They need to get bad and lazy people to buy them.

I don't think that's right at all.
1. Europeans have shied away from hybrids by and large, instead preferring smaller autos and/or diesels.
2. Japan has had a culture of cutting oil consumption for some time now -- you'll note that Japan doesn't have much domestically. Japan also has a culture of "smallness" -- the SUVs aren't as appealing.
3. Americans are buying plenty of Prii, for all kinds of reasons. If you're interested in saving fuel you're not likely to buy an SUV or luxury auto in the first place. The selection bias is pretty obvious. If you're interested in a reliable auto, why not go with the hybrid which has outsold the others by large margins and has been a model for over a decade?

I think the "do gooder" badge is silly. The price of gasoline, be it $1.50/gal or $4.00/gal, isn't a substantial expense for most Americans shopping for a new car. In that sense, everybody who buys it is a "do gooder" -- or just interested in keeping their operating costs low and know that the Prius has cheap gas and rarely needs repairs.

This suggests that people buy hybrids as badges

All cars are bought as badges. That's car marketing 101. Hence the car ads that only show emotions, and never numbers.

In The Netherlands there have been substantial incentives for hybrids and they show up in large numbers on our roads.

This just illustrates that, besides Prius, hybrids have been a commercial disaster for more than a decade now. How long must we wait for a breakthrough?

As anyone who has driven a Hybrid comes to realize, the electrical boost from a stop and when passing is the major reason for buying a Hybrid. There are other reasons having to do with ego and practicality, but I doubt that sells many cars.

I would really like to have a turbocharged Diesel Hybrid that gets 75+ mpg.

In any event my next car will have AWD. I would have long since bought a Ford Fusion if it was available as a Hybrid AWD.

Since none of the Prii are under $20,000US, over $60 billion in sales so far is a nice hybrid validation.

Double a typical car's gas mileage is a big savings in anyone's budget.

On the other hand, a mechanic said that a Prius replacement front light bulb cost $200, something about a sealed transformer/bulb/housing unit.

ALL this is intended and designed to force a car owner into a dealership - where they can overcharge what they want and weasel out of expensive repairs by claiming the auto system computer download shows 'warranty violations'.

Like those forced, under duress, "sure, you paid for it, but we lied - it won't run/you can't use it as you wish/you must click this 'relinquish your ownership rights, it's ours, not yours' software licensing check box" on most expensive consumer "purchases".

We actually OWN a simple Model H four cylinder tractor. After seventy (70) years, it's still the only vehicle we can count on starting at 10F below zero.

A cheap plug in electric hybrid car would be suitable for most people's automotive uses. INNAS NOAX probably has the best solution. A hydraulic hybrid that uses a simple small low powered electric pump to build up pressure for electro-hydraulic operation when the fuel powered engine is not needed. Acceleration and regeneration braking is done by the air accumulators that can be of any size. I do like the Artemis (Bosch owned) electric valve technology better than the INNAS very clever efficient mechanical transformers and motors which may be more suited, but even INNAS is not proposing their very efficient, simple NOAX engine for their automotive hybrid. Nobody with any respect for their neighbors opinions would buy a car with a single piston engine. ..HG..

If the other 20 manufacturers would have done as much as Toyota, we would have 60+M (50 mpg) HEVs in use today and going up at the rate of another 20 M/year.

A mix of increased efficiency HEVs/PHEVs could do an average of about 100 empg. That would be a major improvement (6 times better) than our current 17 mpg fleet.

Of course, HEVs and most PHEVs will be replaced by BEVs with much improved batteries sometime in the next decade (2020/20230) or a few years earlier.

HarveyD. Save your fantasies for the future. Just look at the lack of success for HEVs so far. In almost 15 years, it is still all about only one car model.

If the technical hurdles of the drivetrains of HKVs, HHVs and PHVs could be overcome, they might have the cost advantage over HEVs to become successful.

Two or three more revolutions in oil producing countries may give electrified vehicles the push required to gain increased acceptance. Oil at between $150 and $200 a barrel would bring US gasoline price up to something between $5 and $6 a gallon. Gas guzzlers would need up to $100/week and that could make people think.

Full BEVs may not be the answer for another 10+ years. However, 50+ mpg HEVs will multiply and follow Toyota's lead.

The world may be facing a reality check sooner that we think.

@harvey,
The thoughtful governments of Europe and Japan have given their citizens a taste of $6 gasoline for the last 5 years or so.
They have backed this up with a CO2 mandate ( < 130 gms/km, fleet average).
The result in Europe has been a run to diesel rather than hybrids (though you do see them).
The reason is cost:
The cheapest Renault Megane diesel is e20K (in Ireland) while the cheapest Prius is e28K (!).
[The cheapest gasoline Megane is e19K]
That is a big up-front difference and that is why most people (70%) go diesel.
Nearly everything over 1.5L engine capacity is diesel - it is very hard to resell a large petrol engined car anymore.
[ Japan has gone for hybrids (cleaner air) ]
You can, of course hybridize diesels, but you want to watch the total cost.

Mahonj, I think you have identified a couple of important parameters and among them, the most important: cost. Fuel cost is high in Europe and there is not a lack of incentives for hybrids but still hybrids have not been successful. Instead, diesel cars have increased their market share, e.g. in Sweden from 10% to 60% in a couple of years. In USA and Japan, there is no competition from diesel cars, so hybrids have had some success. If diesel cars would have been competing in USA and Japan, the case for hybrids would have been much tougher. On their own merits, hybrids are not commercially competitive today, unless in very small niches, as e.g. company cars and to wealthy enthusiasts. If the case for HEVs is tough, it will be even tougher for PHEVs. It will take many years until any of those will be competitive on their own merits.

I do not agree. A 50 mpg Prius III HEV @ $22K (USD) versus an equivalent diesel car is very competitive. It is also an excellent competitor quality wise. Some users have over 300,000 Km with the same battery pack. Not too many 5-passenger diesels were produced at over 3 million copies in the last 10 years. Rumors are that the next generation Prius (IV++?) will do 60+ mpg and may have slightly more internal space.

The Prius will be known as the grandfather of the successful mass produced electrified HEV vehicle. Over 5 million units will be on the roads by 2015.

With gasoline price going over $5/gal (in USA) and already at $5.18/gal USD in many places in Canada), the Prius III and next generation will sell very well in USA/Canada/Japan/EU and Asian countries. We need a few more Libya.

"I do not agree. A 50 mpg Prius III HEV @ $22K (USD) versus an equivalent diesel car is very competitive. It is also an excellent competitor quality wise."

1. Apparently those buying cars (voting with their money) do not agree.

2. Only those buying cars vote.