In a post on GM’s FastLane blog, Pam Fletcher, Global Chief Engineer for Volt and Plug-In Hybrid Electric Powertrains, runs through GM’s current vehicle electrification options for consumers: the eAssist light electrification system; the extended range electric vehicle system for the Volt and the Cadillac ELR; and the battery-electric system of the Chevy Spark EV. (But no focus on “conventional” hybrids.) 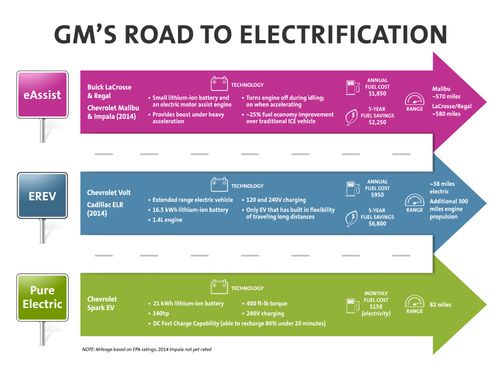 As she outlined it:

Surprisingly that works out to only around a 60% saving on fuel for the Volt.
Although average mileage may be below the ~40 miles EV range of the Volt, clearly there are a lot of times when longer journeys are taken.

That rather takes a bite out of the meme that BEV ranges other than the Tesla are enough as average daily mileage is way below their range, although of course a BEV has more EV range than the Volt.

So, if you keep your Volt for ten years and save about $1,400 a year in gas that is a total savings of $14,000. The Volt sells for $39K and presuming you get the full federal tax rebate it costs you about $32K. Then if you subtract the fuel savings, your comparitive cost vs. a traditional ICE car is $18K. Thus, if you typically buy a car for more than $18K, the Volt would save you money. If you typically buy a car for less than $18K then you are paying extra for the Volt. I suspect nearly everyone who buys a car for more than 18K will get the full $7,500 tax rebate since they have money to burn and so must have a big income.

We bought a Volt on June 1, a year ago. It wasn't until the end of June of this year that we bought gas for the car. We usually got 41-45 miles range trips from the car, and usually had two adults in the car, we only shop or eat at places that are GREEN friendly, so we recharged at home, and while shopping at one of the three malls that have charge stations. We have an SUV that we use for large loads, but we only used it a few times last year. It isn't just the gas one saves in the Volt. That car is so much easier to drive The back seat is comfortable, and the rear area is able to handle two weeks worth of groceries and dog food. The big vehicle gets left home. It's gas is vulnerable to turning into a gel, because it does not have the pressurized system the Volt uses. We have to post reminders to churn the SUVs gas. When it comes to gas savings, it isn't as much an issue of how many miles we put on the Volt, it is more a matter of how few miles we put on the second car. There is no $7,500 rebate for the EVs/PHEVs it is a tax credit. It may be used to balance taxable gains, but is not a refund.

Best to understand that different people have different driving styles. An EV with 80 mile range can be perfectly adequate for some. If you live in a multi-car household in which one car never travels more than 80 miles, saving all that gas works. Or even a single car household which almost never takes long drives (rental is an option in that case).

The people who buy Volts may well be people who frequently take longer trips and need the extra range.