Fuji Heavy Industries Ltd. (FHI), the manufacturer of Subaru automobiles, outlined the Subaru Global Platform which is currently under development as the architecture to be used for all the company’s next-generation vehicles.

The next-generation platform looks ahead to 2025. The main features include Subaru’s biggest-ever enhancement in overall vehicle performance, with an emotionally engaging “dynamic feel” that goes beyond high performance; the highest levels of safety; and a single design concept for development of all models, adaptable to electrification in the future. 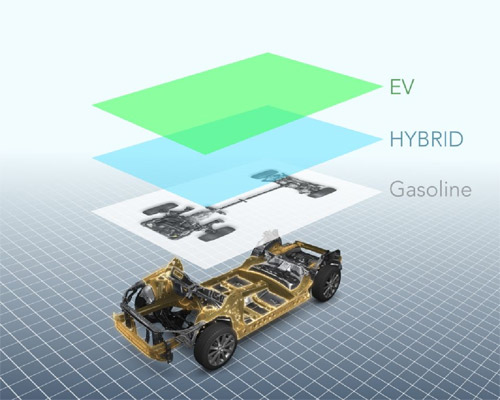 The Subaru Global Platform is part of the six initiatives to enhance the Subaru brand described in the Company’s mid-term management vision, “Prominence 2020,” announced in 2014. Together with the horizontally-opposed engines, Symmetrical All-Wheel Drive (AWD), and EyeSight that represent Subaru’s core technologies, the new platform will constitute the basic foundation of the next generation of Subaru vehicles.

Active safety. The new platform achieves a center of gravity that is 5 mm lower than present models. Together with the major improvements in rigidity and the evolution of the suspension system, this lower center of gravity makes possible a more stable driving experience than ever before, and offers outstanding danger avoidance capabilities on a level with a high-performance sports car.

Passive safety. Thanks to a frame structure that enables more efficient energy absorption in the event of collision and the enhanced body rigidity resulting from the increased use of high-tensile steel plates including materials formed by the hot press method, impact energy absorption is improved by 40% over present models. The platform anticipates further improvements in strength and new materials and has the potential to continue to offer the world’s highest levels of collision safety even in 2025, FHI said.

Single design concept, adaptable to electrification. The new platform will offer a single unified design concept for all Subaru models. Planning the main specifications of all vehicle types at one time and flexibly adjusting these basic specifications to match with the requirements of different models will strengthen the entire Subaru lineup while still allowing the company to develop models that take advantage of each model’s strengths.

The new concept allows one design concept to be adapted not only to gasoline engines but also to hybrid vehicles, plug-in hybrids, electric cars, and other types of alternative power units for which demand will increase further.

Development based on a single design concept makes it possible to use limited development personnel and facilities efficiently to develop a diverse range of models and to direct the resulting savings into areas that can make our products more competitive.

It will also become possible to produce platform components for multiple models in the same one production facility, rather than manufacturing them in different factories as has been the case in the past. This will increase production efficiency at Subaru’s factories and at our partner companies. The new unified design concept will also make it easier for the two factories in Japan and the Subaru of Indiana Automotive plant in the United States to carry out bridge production of multiple different models on a single line, making the global production system more flexible.

The Subaru Global Platform that offers these benefits will be used in the development of all Subaru vehicles from now on, beginning with the next-generation Impreza, due to hit the market in 2016.