On 10 March, Honda Motor Co. began sales in Japan of its all-new fuel cell vehicle (FCV), the Clarity Fuel Cell. (Earlier post.) Honda is targeting sales of approximately 200 units in the first year, with a focus on lease sales mainly to local government bodies or businesses Honda has already been working with over the years for the development and popularization of FCVs.

During this period, Honda will collect information about the in-market use of the Clarity Fuel Cell as well as its external power output device and gather opinions and requests from customers and other relevant organizations, and then later begin sales to individual customers.

Employing original Honda technologies, the fuel cell stack for this model was downsized by 33% compared to the previous version of the fuel cell stack yet delivers 103 kW, with an output density of 3.1 kW/L—approximately a 60% improvement. The fuel cell powertrain was made as compact as a Honda 3.5L V6 engine, enabling it to be packaged under the hood of a sedan-type vehicle for the first time. 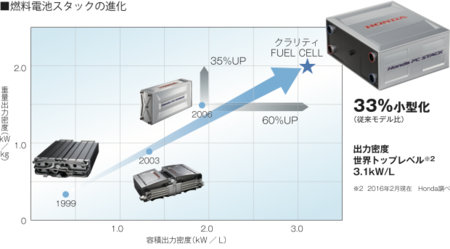 The Clarity Fuel Cell also features a Li-ion battery and a 130 kW, 300 N·m drive motor. Combined with the improved efficiency of the powertrain and a reduced energy requirement for driving, a 70 MPa high-pressure hydrogen storage tank provides a cruising range (for reference) of up to approximately 750 km (466 miles).

That top range is based on Japan’s JC08 mode and after refueling the vehicle at a hydrogen station with charging pressure of 70 MPa under the standard conditions specified in the SAE standards (J2601) (e.g. Ambient temperature of 20 degrees Celsius/68 degrees Fahrenheit; Begin refueling into a high-pressure hydrogen tank with internal pressure of 10 MPa). The cruising range may vary when the vehicle is refueled at hydrogen station with different specifications, as the amount of hydrogen put in the tank will vary depending on the specifications of the hydrogen station.

(For the US, under EPA’s criteria, the range is expected to be some 300 miles.)

The hydrogen tank can be refilled in approximately three minutes.

In combination with a portable external power output device—the Power Exporter 9000—which also went on sale, Clarity Fuel Cell can function as a “power source on wheels” that is capable of supplying approximately seven-days’ worth of electricity for an average household in Japan.

More nonsense and more pipe dreams. The Japanese auto industry risk going down in a big way (apart from Nissan IMO) when small battery electric robotaxies annihilate the global market for sub 50,000 USD vehicles sold for private ownership. It will begin in about 2020 and the global transformation of the auto industry could be completed by 2030 because the money and lives saved is so good for battery electric robotaxies. Half of all the known automakers will be gone by 2030. My bet is that Nissan, Toyota, FiatCrysler, Peugeot and Citroen will not make it to 2030 alive.

Typo Honda will not make it. Typed Nissan by mistake in that list. Sorry.

Henrik, Honda is also producing a BEV and PHEV version of the Clarity. Assuming the range and prices are competitive, they'll probably do very well.

200 FCVs the first year is a fairly small series run, one tenth of the number of Fit EVs they produced for the US.

Honda and GM have partnered, like Hyundai they may have HEV, PHEV, FCEV and perhaps PFCEV. This makes the base unit create economies of scale.

Since both could be AWD, they could operate well in all weather conditions, when equality equipped. Both could be refilled automatically.

Price wise, with the price of FCs going down quickly, the cost for identical extended range and size BEVs/FCEVs may be very similar in the post 2020 era?

Doubt that Toyota will fold. Japanese car makers may have to merge to better compete with Chinese and So-Korean? USA's Treasury may have to come to GM's and Fiat-Chrysler's rescue again unless they are taken over by Ford or Chinese car makers?

I believe that in the US at least, there are regs requiring the refueling process to be attended. Considering the safety issues, that seems to be a reasonable precaution.

Most of the H2 refueling stations in California are not even self-service at this point.

Harvey, you truly confuse me. I know you worry about range because of the cold winters up there. However... Could you explain your logic that tells you that FCVs will be cheap enough, available enough and have enough helping stationsomeone before EVs will have 300-400 mile range?
There are many the will have 200 mile range in the next 12-18 months at a cost in the mid $30k range.
Yet you'd put your faith in all the FCV problemso being solved first?!?!? Even the availability of fueling infrastructure everywhere you need!?!?

I don't remotely get your logic, but if you're ever looking for someone to bet against in games of logic, look me up! I'd love to take your money!

Nice to see the 9KW power exporter.
Better sized than the usb / 1KW outlets currently on offer.
Surely the socket needed to make this unit work on all BEV,s would not add $100 as OEM option.

Hope they can push this into the market.

Don't beat up on Harvey, he is our one optimist in a cynical world :)

Science will find a way for FCVs. Large-scale Hydrogen production is very near(w/o having to reform NG), and in California, they are committed to the Hydrogen Highway. The fueling infrastructure is growing. Cheaper catalysts are being found. I know many here are religiously committed to BEVs, but the reality is that the cars are heavy, the range is limited, except for the high-priced models, and the batteries degrade too rapidly. It may take time, but the upside for the FCV is higher than that of BEVs. BEVs will eventually be surpassed. You also won't have to worry about finding huge quantities of rare earths.

Harvey is the eternal optimist and if more people were like him the world would be a better place.

Larzen - given that FCVs use electric motors as well as BEVs and PHEVs, why would rare earth consumption be lower with the former rather than the latter two? Tesla state that the Model S doesn't use rare earths so it should be possible to go the BEV route and not worry that China has a tight grip over supply.

Here in Australia we also have significant RE deposits that can add to supply if needed. Australians may typically now be lazy, feckless and anti-innovation but by god can we dig stuff out of the ground!

With slightly different markets, both technologies will flourish within their own niche market by 2030 and onward.

Many users may have a small EV city vehicle + a larger family FCEV, much the same way as many use both gas and diesel units.

@Biff - thanks for the levity, brightened my day.

@Larzen - it's not religion, it's economics. No doubt the FCV cost will come down, but no evidence so far that vehicles, infrastructure or fuel will beat BEVs on cost.

The only performance advantage H2 can claim is refuel time on the very few long distance trips someone might take each year vs disadvantage every other week of the year.

It takes a lot of faith to believe that FCVs are going to win that competition. The math and science argue in favor of BEVs.

It may not be a matter of one or the other. BEVs and FCEVs may end up with different markets as both batteries/chargers and FCs/Electrolizers evolve.

One day (soon or by 2030 or so), your home BBQ, home fire-place, home emergency power unit and your extended range AW FCEV may operate from similar low pressure SS H2 tanks.

H2 from your home larger low pressure SS H2 tank may be used to refill your FCEVs on an as required basis.

Where available, piped-in low pressure H2 may be used to refill your home H2 SS tanks and FCEVs?